Source: DECR
Natalya Mihailova | 09 November 2015
On 5 November 2015, the 5th World Congress of Compatriots Living Abroad began its work in Moscow. Taking part in the Congress, which this year is dedicated to the 70th anniversary of the Victory in the Great Patriotic War, are some four hundred delegates from ninety-seven countries. 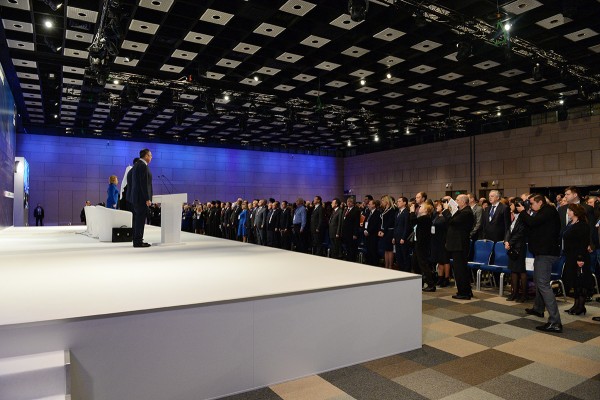 In his address to the participants in the Congress’s plenary session, the President of the Russian Federation, Mr. Vladimir Putin, noted that the Russian Orthodox Church was playing “an ever-greater role in expanding humanitarian ties between our compatriots and Russia.” The President said, “The Russian expatriate community has always united people of different ethnicities and faith,” and today they are acting together to meet the challenges facing our country.

Mr. Putin emphasized the necessity to promote abroad education in the Russian language. According to the President, a concept for Russian schools abroad has been already worked out. “The purpose of such schools is to promote national methods of teaching and education, of developmental teaching, to assist in the study of the Russian language and of subjects that have to do with Russia, such as this country’s history and geography, the history of its culture and the arts. It is clear that we need to make more efficient use of extracurricular educational establishments, such as Sunday schools of the Russian Orthodox Church and educational centres of our other religions, to set up courses and groups to study Russian.”

His Holiness Patriarch Kirill of Moscow and All Russia also addressed the participants in the forum. As His Holiness noted, the centuries-old history of Russia demonstrates clearly that the ability to overcome divisions and act together in the face of external and internal challenges has always been one the essential characteristics of our people. “The internal unity is a key opening the doors of many possibilities, for where there is unity, there are also invincible might and spiritual fellowship; where there is unity, there also true love and mutual support,” the Primate of the Russian Church said, “Thanks to the unity, great historic breakthroughs… have been made possible.” His Holiness reminded all those present that an example of such nation-wide unity had been shown during the Great Patriotic War. 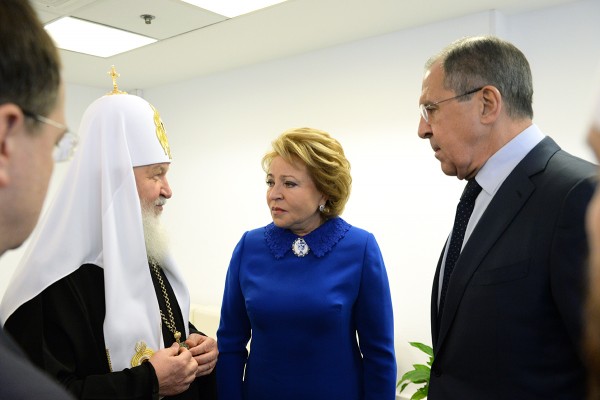 “However, there were not only victories in the history of our homeland,” Patriarch Kirill continued, “We do not forget about defeats, caused by the spiritual weakening of the people and of the unity. His Holiness called the Revolution of 1917 and the fratricidal civil war the spiritual defeats which caused an unprecedented wave of emigration. The October Revolution, the death of the Royal family, the outrageous lawlessness, terror and large-scale repressions became a terrible tragedy for the people. The country lost millions of its citizens who either died or were forced to leave Russia.

Those who found themselves in a foreign land faced a dilemma: either to lose their spiritual and cultural identity, feel resentment against their country and their people, and later assimilate with other nations, or to show once again their ability to unite. “Our emigrants created the Russian émigré phenomenon,characterized not only by a high intellectual level… but also by an ability to preserve their faith, spiritual values of their people, their native language and culture,” His Holiness said.

According to Patriarch Kirill, “the Church was of great importance for the multimillion Russian Diaspora, for it became a unifying force and major attraction for our brothers and sisters living abroad, offering them consolation and support.”

His Holiness Patriarch Kirill shared with the participants in the forum his recollections of the time when he lived far from his homeland, serving as rector of the Church of the Nativity of the Most Holy Theotokos in Geneva. “It was a very small church, a home chapel, with few parishioners, for people were afraid to attend it. It was the time of the Cold War. However, there was a group of parishioners, thanks to whom it was possible to lead a regular liturgical life at the church. I was to gather together representatives of the post-Revolution émigré community, their children and grandchildren, and those who left their homeland later. I thank God for letting me have this experience and get to know the people who had become victims of our national tragedy, but had preserved profound faith and love for their homeland,” the Primate of Russian Church said.

The Russian Orthodox Church continues to carry out her important mission among the compatriots living abroad, His Holiness noted and said, “The life of our parishes abroad is based on the principle of unity in faith beyond any differences in ethnicity or language, and beyond any political preferences. Today’s tragedies which characterize the relationships among the fraternal peoples of the former Soviet Union (first and foremost, I mean the Ukrainian tragedy), have made no considerable changes in the life of our parishes abroad. Where the Russians and the Ukrainians were together, they still are together. Perhaps, it is not fortuitous that the extreme nationalist forces in Ukraine try to weaken our Church; they are well aware that while there is a common spiritual space, no sovereignties, borders or economic conflicts can destroy this inner spiritual unity.”

According to His Holiness, the extreme nationalism and unwillingness to live together with people of other nationality or other culture is the major threat to the world today. “Such people are unable to stay within the Church; they leave… they do not agree with her fundamental messages unifying people,” Patriarch Kirill continued, “Perhaps, that is why our Church is suffering today like no other organization from the actions, committed by the extreme nationalist forces fuelling by their negative energy the fratricidal conflict in Ukraine.”

The Congress will continue its work on November 6. To conclude the forum, the participants will adopt a resolution.