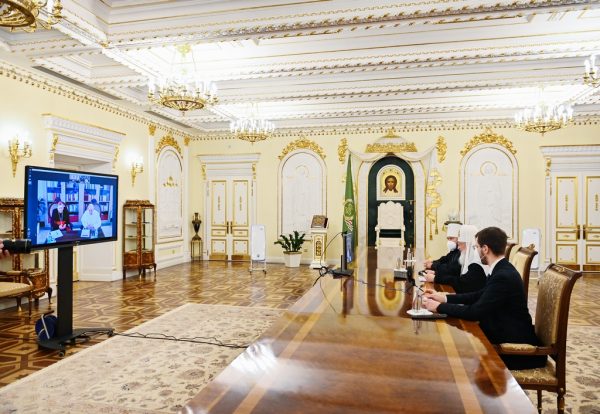 On March 16, 2022, His Holiness Patriarch Kirill of Moscow and All Russia had an online talk with Pope Francis.

Taking part in the talk from the Russian Orthodox Church was also Metropolitan Hilarion of Volokolamsk, Chairman of the Department for External Church Relations.

The Roman Catholic Church was represented also by Cardinal Kurt Koch, President of the Pontifical Council for Promoting Christie Unity.

His Holiness warmly greeted the Primate of the Roman Catholic Church and expressed satisfaction with a possibility of arranging the talk.

The talk included a detailed discussion of the situation on Ukrainian soil. Special attention was paid to the humanitarian aspects of the current crisis and the actions of the Russian Orthodox Church and the Roman Catholic Church for overcoming its consequences. The parties underscored the utmost importance of the ongoing negotiation process, expressing the hope that a just peace would be achieved as soon as possible.

On the same day, His Holiness Patriarch Kirill of Moscow and All Russia also held a video call with Archbishop of Canterbury Justine Welby.

The Patriarch and the Archbishop discussed in detail the crisis in Ukraine. His Holiness Patriarch Kirill set forth in detail the stand taken by the Russian Orthodox Church on the developments since 2014. They dealt with the humanitarian aspect of the crisis, including the church aid to refugees. His Holiness in particular stressed that each person should have the right to freely confess their faith and speak their mother tongue without being subjected to political persecution for it.

The sides underscored the need to achieve as soon as possible a lasting peace based on justice and agreed to continue the interaction.