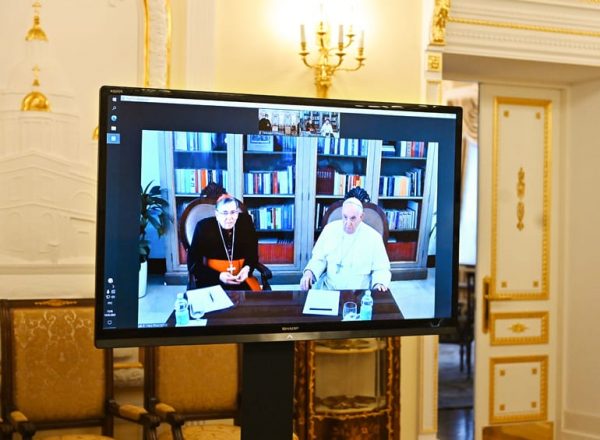 Commentary by the Communications Service of the Department for External Church Relations of the Moscow Patriarchate on the interview given by Pope Francis to the Italian publication Corriere della sera:

It’s regrettable that a month and a half after the conversation with His Holiness Patriarch Kirill, Pope Francis chose the wrong tone to convey the content of this conversation. Such utterances can hardly further constructive dialogue between the Roman Catholic and Russian Orthodox Churches, which is so necessary at the current time.

This is what Patriarch Kirill actually said in his conversation with Pope Francis, which took place on 16th March: “I thank you for the opportunity to hold this meeting. When we met in 2016 in Cuba, I said to you that we were meeting at the right time and in the right place. And although our communication is being held through the use of long-distance technology, I still believe that we are once more talking to each other at the right time. With your permission, I would like to share with you my perception of the present-day difficult situation. Of course, we live in different informational expanses: the Western media has either remained silent or said practically very little on those facts which I would like to draw your attention to.”

Patriarch Kirill further noted that the conflict began in 2014 with the events of Maidan in Kiev, as a result of which there was a change of government in Ukraine. He drew special attention to those events in Odessa and their consequences: “There was a peaceful meeting in the city of Russian speakers who were defending their right to their own language and culture. This peaceful gathering was attacked by Nazi groupings who beat them up and struck them with sticks. People sought refuge in the nearest building which was the Trade Union House. At that moment something terrible happened: the building was locked and then burnt to the grounds. People tried to flee by jumping from the second and third floors, and of course they sustained terrible injuries as they hit the ground. Those who stood by the windows decided not to jump as they were being fired upon from below. We watched all of this as it happened live on the television. This terrifying lesson from Odessa influenced the decisions of the population of south-east Ukraine in defending their rights.”

Patriarch Kirill further reminded the Pope that at the end of the Soviet period Russia received assurances that NATO would not expand a single inch eastward. However, these promises were not kept and even the former Soviet Baltic republics became members of NATO. An extremely dangerous situation had risen as a result in that the borders of NATO were now within 130 kilometers of St. Petersburg and the time it takes for a rocket to reach the city is a few minutes. Had NATO received Ukraine into its membership, then the time it would take for a rocket to reach Moscow would also be a few minutes. Russia could not and cannot permit this.

In conclusion the Patriarch emphasized: “Of course, the present situation causes me great pain. My flock is on both sides of the conflict and most of them are Orthodox people. Part of the opposing side are also among your flock. I would like therefore, leaving the geopolitical aspect to one side, pose the question of how we and our Churches can influence the situation? How can we act together to bring peace to the hostile parties with the single aim of establishing peace and justice? It is very important in these conditions to avoid further escalation.”

The response by Pope Francis was reported accurately by Vatican News in its release of 16th March: “Pope Francis thanked the Patriarch for the meeting, motivated by the desire to point out, as shepherds of their people, a path to peace, to pray for the gift of peace and for a ceasefire. The Pope said, in agreement with the Patriarch, that ‘The Church must not use the language of politics, but the language of Jesus.’ Pope Francis added that ‘we are shepherds of the same Holy People who believe in God, in the Holy Trinity, in the Holy Mother of God: that is why we must unite in the effort to aid peace, to help those who suffer, to seek ways of peace, and to stop the fire.’”

The statement also noted that the “Pope and the Patriarch stressed the exceptional importance of the ongoing negotiation process.”