Source: DECR
Natalya Mihailova | 23 August 2017
On 22 August 2017, at the Patriarchal and Synodal Residence in St. Daniel’s Monastery in Moscow, His Holiness Patriarch Kirill of Moscow and All Russia met with the Secretary of State of the Holy See, Cardinal Pietro Parolin. 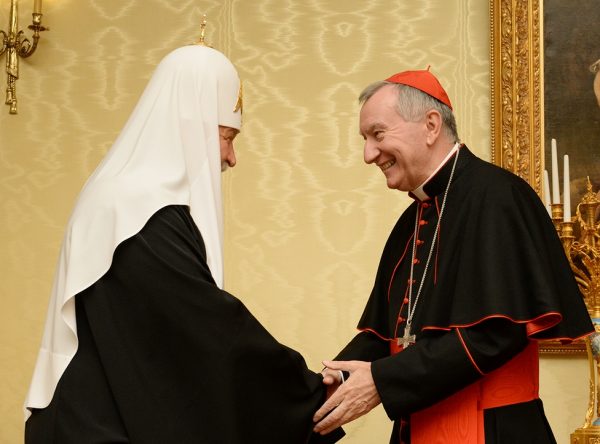 Representing the Roman Catholic Church at the meeting were also Archbishop Celestino Migliore, Apostolic Nuncio to the Russian Federation; Msgr. Visvaldas Kulbokas of the Holy See Secretariat of State; and Msgr. Erwin Lengel, first secretary of the Apostolic Nunciature to Russia.

Greeting the high guest, His Holiness Patriarch Kirill noted that the first official visit of the Vatican’s Secretary of State to Russia was a sing of “progress in the relationships between the Russian Federation and the Holy See.”

“Yet, it is even with greater satisfaction that I note the development of our inter-Church relationships,” His Holiness said and emphasized that a considerable impetus for promoting cooperation between the Russian Orthodox Church and the Holy See had come from his meeting with Pope Francis in Havana. “It indicates that a new stage in our relations has indeed begun, and it is full of very important events. It became possible, because in Havana we came to an agreement concerning many present-day issues. And the commonality of our positions gives us an opportunity to make respective plans and implement them.”

According to Patriarch Kirill, the bringing of the holy relics of St. Nicholas the Wonderworker from Italy to Russia was the most significant of all the recent events.

“Never before so many faithful were able to venerate a shrine in such relatively short period of time, in two months…” he said.

From May 21, to July 28, while St. Nicholas’s relics were in Russia, over 2.3 million people came to venerate them, His Holiness noted.

“There were other, so-called ‘social’ queues as well, for disabled and very old people who could not stand in the lent. I do not know how many thousands of such people came, but I know that there were many of them,” Patriarch Kirill continued.

“When we were seeing off St. Nicholas’s holy relics in St. Petersburg, I said, addressing the worshippers, that neither church, nor secular diplomacy can do as much for the promotion of relationships between the Catholic and the Orthodox worlds as St. Nicholas has done,” His Holiness added, “We have become witnesses of the living tradition of the first millennium. The shrine, venerated by both the East and the West, is not an archeological object but a real shrine that attracts thousands and thousands of people. That is why this event is certainly the unique one. It has left its mark in the history of our Churches’ relations as a very vivid and bright page. These are truly spiritual outcomes of the Havana meeting.”

The Primate of the Russian Orthodox Church also emphasized that during the meeting in Havana he and Pope Francis had showed solidarity concerning the situation in the Middle East and North Africa where Christians are being subjected to persecution.

“Our Church is actively involved in rendering humanitarian aid to those affected by the conflict in Syria and in other countries. It is important to have a wider support of the whole Christian community in this work,” His Holiness said, “The cooperation between the Orthodox Church and the Roman Catholic Church in providing humanitarian assistance to people in the Middle East would be a very important factor.”

“I think that by developing cooperation in this sphere we can try to establish the foundation for joint projects aimed at rendering assistance to those affected by the tragic hostilities in the Middle East,” Patriarch Kirill said.

As he noted, thanks to the working group established in 2017 by the Presidential Council for Cooperation with Religious Organizations, in Russia there has appeared an opportunity to carry out collaborative work to render aid to the population of Syria.

His Holiness Patriarch Kirill and His Eminence Cardinal Parolin also discussed the situation in Ukraine. As Patriarch Kirill emphasized, the Church must become a factor of reconciliation and must not be involved in the conflict.

“The Church ought to play no other role but peacemaking when there is a conflict between people,” he said and noted that it was a principled stand taken by the Ukrainian Orthodox Church of the Moscow Patriarchate concerning the current situation in Ukraine. “Great many people deeply appreciate the peacemaking position of the Church. It is with satisfaction that we note similarity in our Churches’ positions on the role of the Church in the conflict in Ukraine,” His Holiness concluded.

The Vatican’s Secretary of State, Cardinal Pietro Parolin, conveyed to the Primate of the Russian Orthodox Church greetings from Pope Francis and expressed his hope for further development of relationships between the two Churches.

The Secretary of State noted the solidarity of the Vatican and the Russian Orthodox Church concerning the situation in the Middle East. As he pointed out, the plight of Christians and other religious minorities there must arouse conscience of the entire world community and urge the Churches to make their contribution to the improvement of the humanitarian situation in the region.

Speaking of the situation in Ukraine, the representative of the Holy See also emphasized that local Churches ought to preserve and fulfill their peacemaking potential, doing all they can to re-establish peace and civil accord in the country.

Most viewed articles
The Authenticity of the Vision of Christ in the Life of Saint Silouan120
Epistle of the Council of Bishops of the Russian Orthodox Church Outside of Russia103
Living with Cunning People77
“A New Creation” Through the Cross of the New Adam65
The work of the Church in society is quiet, but full of hope and love, says the Director of Lumina Publications35
Most popular authors
Archimandrite Zacharias Zacharou120
Pravmir.com team103
Fr. Andreas Agathokleous77
Priest Philip LeMasters65
Ștefana Totorcea35