Source: DECR
Natalya Mihailova | 22 February 2017
On 17 February 2017, His Holiness Patriarch Kirill of Moscow and All Russia met with Ms Anne Hidalgo, Mayor of Paris, at the Cathedral of Christ the Saviour in Moscow. 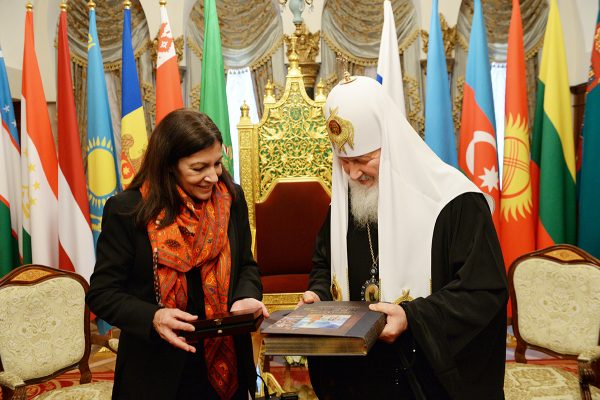 Representing the Russian Orthodox Church at the meeting were also Metropolitan Hilarion of Volokolamsk, chairman of the Moscow Patriarchate’s Department for External Church Relations; Bishop Antony of Bogorodsk, head of the Moscow Patriarchate’s Administration for Institutions Abroad; Mr. Vladimir Legoyda, chairman of the Synodal Department for Church-Society and Media Relations; and Rev. Alexander Volkov, head of the Patriarchal Press Service.

Greeting the guest and the delegation that accompanied her, His Holiness Patriarch Kirill said in particular,

“We continue our communication, established in Paris. This meeting brings back to mind a remarkable event in which we took part – the consecration of the Cathedral of the Holy Trinity in the capital of France and the opening of the Spiritual and Cultural Centre on Branly Embankment. One can often see this centre on our TV and learn about the events held there. I am sincerely glad that in the vicinity of the cathedral cultural activities are being developed, aimed at helping our peoples deepen mutual understanding and realize the commonality of our cultural traditions.”

The Primate of the Russian Orthodox Church told his guests about the history of reconstruction of the Cathedral of Christ the Saviour, in which spiritual and cultural dimensions are intertwined.

“We decided to diverge from the original design,” His Holiness said, “As, perhaps, you were told, that church was barbarously blown up in the beginning of the 1930s. At first they wanted to build at this place a very tall skyscraper with a statue of Lenin on top; the statue itself was supposed to be some 100 meters high… Yet, there was a reasonable man who said that if such enormous statue of Lenin would stand on such a tall building, then, due to heavy clouds that frequently cover the sky in Moscow, people could only see Lenin’s boots; the rest of the figure would be hidden in the clouds. The idea was rejected, and an open swimming pool was constructed here. When we reached our first agreement with the Government of Moscow concerning the reconstruction of the Church of Christ the Saviour, we wanted to fill up the pool with earth and restore the hill, on which the original cathedral had stood. However, later we decided that the church was to become both the spiritual and cultural heart of the city, and therefore a cultural centre was opened underneath the church at the place of the swimming pool.”

As His Holiness noted, this place became a venue for interesting exhibitions and concerts, the spiritual and cultural centre for whole Moscow.

“Something similar there is now in Paris,” His Holiness said, “And we express our gratitude again and again to you as the mayor of the city, to the French state, to the people of France, and to the Parisians for their assistance in implementing the project.”

The Primate of the Russian Orthodox Church expressed his hope for the development of relations between the capitals of the two countries in the cultural, religious and other spheres.

Ms Anne Hidalgo thanked His Holiness Patriarch Kirill for the meeting and noted the importance of the consecration of the church in Paris. As the Mayor of Paris said, the Parisians now have a feeling that the Spiritual and Cultural Centre has always been there, on that particular spot. It became an organic part of the architectural landscape of the city.

Ms Hidalgo told about the educational programmes that the Spiritual and Cultural Centre in Paris would develop in cooperation with the Government of Moscow and mentioned the activities aimed at promoting the relationships of the French capital with a number of the Russian cities, in particular, with Moscow and Kazan.

The participants in the meeting also discussed the relations between France and Russia. His Holiness Patriarch Kirill said in particular,

“… Our peoples have much in common. Besides, there are many historical meeting points: for example, Emperor Alexander III built a bridge in Paris; it was at his time that the construction of the cathedral was completed. It was consecrated in 1883. As schoolchildren, we all would read the French literature, and I think that many children in our country regarded these book not as the foreign literature, but as a part of their own cultural tradition, not to mention the importance of the French language in the life of the pre-revolutionary Russia.”

As His Holiness emphasized, the cultural cooperation promoted by local authorities and cultural and religious figures strengthens the friendly relations between the peoples.

Ms Hidalgo also noted the importance of the ties existing between the Russian and the French people.

“We will pray and work so that the relationships between our countries and people might continue to develop,” His Holiness Patriarch Kirill said.