On 9 February 2014, at the Moscow Kremlin’s Faceted Chamber, His Holiness Patriarch Kirill of Moscow and All Russia met with the President of the Republic of Macedonia, Mr. Gjorge Ivanov. 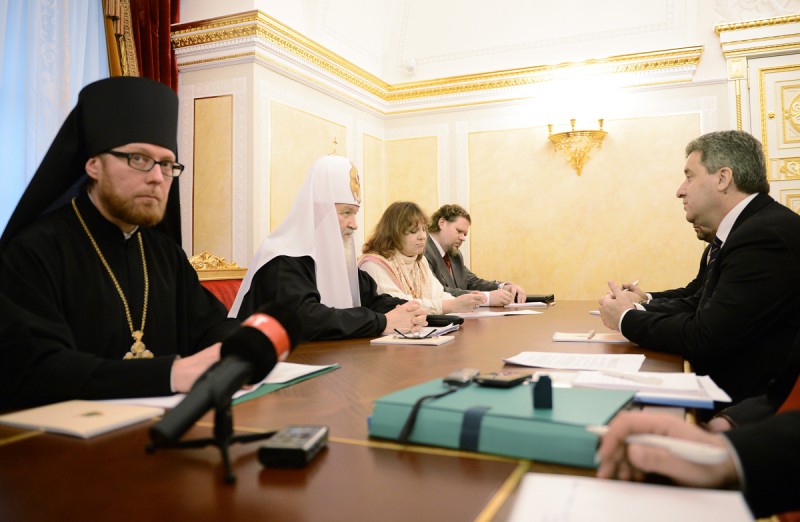 The President of Macedonia was accompanied by Mr. Boris Josifovski, Secretary General of the President’s Cabinet; Mr. Darko Kostadinovski, State Counsellor for Foreign Policy; and Mr. Ilija Isajlovski, Ambassador Extraordinary and Plenipotentiary of the Republic of Macedonia to the Russian Federation.

Representing the Moscow Patriarchate’s Department for External Church Relations at the meeting were archimandrite Philaret (Bulekov), DECR vice-chairman, and Mr. Andrei Khoshev, a staff member of the Secretariat for Inter-Orthodox Relations.

Greeting the high guest, the Primate of the Russian Orthodox Church reminded all those present that the two nations have common history thanks to Ss Cyril and Methodius. As Patriarch Kirill noted, the city of Ohrid, from which the Russian people received their first books in the Slavonic language, was “an intellectual Jerusalem for all Slavs.” “For the Russian Orthodox Church, the Macedonian land is closely linked with the deeds of St Cyril Equal-to-the-Apostles and with our common spiritual and cultural heritage,” His Holiness said.

“The Russian Empire always tried to defend the Macedonian people and protect the sites, now situated in the territory of your country, but important for the whole Orthodox world,” Patriarch Kirill continued. “Rendering support to the fraternal Orthodox people was a high priority for the Russian state in its foreign policy…”

As His Holiness Patriarch Kirill noted, this year marks the 20th anniversary of the establishment of diplomatic relations between the Russian Federation and the Republic of Macedonia. The Primate of the Russian Orthodox Church expressed his appreciation of the current cultural ties between the two countries and emphasized that the pilgrimages of the Russian people to Macedonia and of the Macedonians to Russia play an important part in the bilateral relations.

The participants in the meeting discussed the life of compatriots. After the tragic events of the October Revolution, many people left Russia and some of them settled in the territory of present-day Macedonia. The Russian population there today numbers forty-eight thousands. His Holiness Patriarch Kirill of Moscow and All Russia expressed his appreciation for the good attitude of the leadership and people of Macedonia to the Russian people residing in their country.

Among the topics raised at the meeting was the situation of Orthodoxy in Macedonia. According to His Holiness, the re-establishment of the canonical status of the Macedonian Orthodox Church will be an essential factor for preserving the national, cultural and religious identity of the country. Therefore, it is important to solve this problem through the fraternal dialogue with the Serbian Orthodox Church.

His Holiness Patriarch Kirill of Moscow and All Russia noted the alarming changes in the life of the European states that are deviating from the traditional understanding of family as a union between man and woman, as well as from the traditional understanding of personal and family morality. “The institution of marriage is been rapidly destroyed,” the Primate of the Russian Church said. “However optimistic the various propaganda clichés might sound and however frequently we might be told that nothing bad is going on, the vast majority of the Europeans see a great danger in it.” Patriarch Kirill noted that the voices of the majority are often not heard. According to His Holiness, one may wonder whether people today, including those living in the European continent, can be free in expressing their opinions that differ from the views of political and financial elites. “Many Europeans are aware of the fact that it can lead the civilization to a catastrophe,” Patriarch Kirill said.

“As a believer, I am deeply convinced that the only law of life, without which there is no life at all, is a moral law, implanted by God in human nature,” His Holiness continued and noted that the Church should say to the modern society what it can and can’t do in order not to break the God-given law of life.

The euthanasia that is gaining its approval in the laws of some Western European countries contradicts this law of life. “We heard terrible news that the Belgian Parliament was considering a law about the child euthanasia,” Patriarch Kirill said. “Mobile euthanasia units are emerging in the West. There used to be an emergency service which saved people’s lives, and now there are mobile euthanasia units that help people die quickly.”

The Primate of the Russian Orthodox Church also spoke about the pressure that is being put on the Balkan countries to make them accept the model, prevaling in the West. As Patriarch Kirill noted, gay parades have been carried out in Slovenia and Croatia despite people’s will. He also mentioned the statement by the European Court of Human Rights, according to which the Greek laws, making no provision for homosexual marriages, contradict the European Convention on Human Rights. “We regard it as a tough interference of the state in the spiritual life,” His Holiness said.

Mr. Gjorge Ivanov expressed his joy over the opportunity to meet with His Holiness Patriarch Kirill of Moscow and All Russia, noted that the two peoples had centuries-old relationships, and told those present about a considerable contribution of the Russian immigrants to the spiritual and cultural life of Macedonia.

The Macedonian President expressed his condolences over the tragedy in the city of Yuzhno-Sakhalinsk: a gunman opened fire in the cathedral, killing two and injuring six people.