Source: DECR
Natalya Mihailova | 15 December 2014
On 11 December 2014, His Holiness Patriarch Kirill of Moscow and All Russia met with Prof. Dr. Mehmet Görmez, head of the Presidency of Religious Affairs of the Republic of Turkey, usually referred to as Diyanet, at the Patriarchal residency in Chisty side-street. 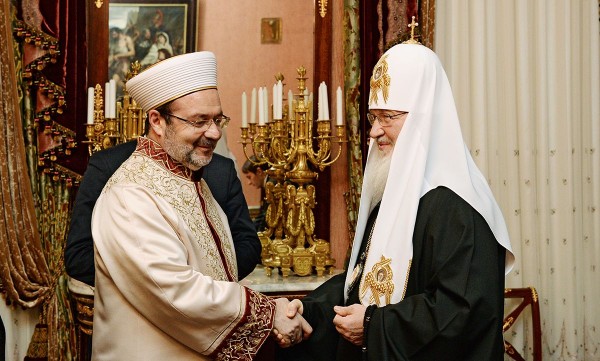 Among the participants in the meeting were also H.E. Mr. Ümit Yardim, Ambassador Extraordinary and Plenipotentiary of the Republic of Turkey to the Russian Federation; Mr. Mehmet Emin Kiraz, Advisor to the Ambassador; and Dr. Dursun Aygün, Advisor for Religious Affairs of Turkey’s Embassy in Russia.

Greeting the guest, His Holiness Patriarch Kirill mentioned their previous meeting which had taken place in 2001 and initiated relations between the Moscow Patriarchate and Muslim leaders of Turkey. Within the framework of the agreements reached during that meeting, a working group on the dialogue between the Russian Orthodox Church and the Diyanet was established.

At their sessions, members of the working group discuss such issues as pilgrimages, religious tourism, and student exchange. His Holiness Patriarch Kirill suggested holding such meetings on a regular basis and broadening their agenda.

“It would be good if scholars could join the working group, since it is very important to reflect together on what is going on with human civilization,” His Holiness said, “It is perfectly obvious that the Western civilization, the modern Western culture, has lost its ties with religion and that the Western world cannot be called Christian any more. Religious values are no longer present in social sphere. Such laws are being adopted that contradict God’s commandments and traditional morality.”

The deviation from norms of religious morality, which had occurred under the pressure of secular forces in a number of protestant churches in Western countries, has affected the bilateral relations between the Russian Orthodox Church and those communities, His Holiness told Dr. Görmez.

The Primate of the Russian Church also mentioned the cooperation with the Catholic Church, saying, “Catholics remain faithful to the Biblical tradition. Yet, they find it more and more difficult to raise their voice. We strive to render all possible support to the Catholic Church and believe that it is necessary to promote and deepen our dialogue on these issues.”

His Holiness also emphasized that the relationships with the Islamic world and other religious groups that uphold God-given morality ought to be strengthened.

The Primate of the Russian Orthodox Church expressed his deep concern over the Christianophobia spreading in the Middle East. “We are alarmed at the developments in Iraq, Syria, and some other countries, where militants kill Christians,” His Holiness said, “The Christian population in Northern Iraq has decreased considerably. Churches are being destroyed. Christians are being killed, sold into slavery, or forced to accept Islam or pay a special tax.”

The Russian Church is concerned over the fate of two Christian hierarchs abducted in April 2013, – Metropolitan Paul of Aleppo and Metropolitan Mar Gregorios Yohanna Ibrahim, His Holiness Patriarch Kirill emphasized.

The Primate of the Russian Orthodox Church also dwelt on the consequences of actions committed by radical forces, in particular, by the “Islamic State” group. “I cannot get rid of the idea that the “Arabic Spring” and the emergence of Muslim radical military forces, who commit public executions, are aimed at demonizing Islam in the eyes of the world community,” His Holiness Patriarch Kirill added.

Most viewed articles
“Do Not Weep”154
Christ the Life Giver139
Best Films of the Pokrov Film Festival Have Been Determined132
The Religion of Self119
Patriarch Kirill Answers Questions from Participants of the Ninth Faith and Word Festival92
(VIDEO)Celebrating 5 years of Byzanfest International Orthodox Film Festival90
“He preached the message of the Resurrection for 12 years”: First Bishop of Deva Gurie Georgiu laid to rest at Cathedral of St Nicholas44
Patriarch Kirill: “An Effective Way to Overcome Social and Economical Dead End Is to Be Guided by the Word of God”30
Why Pray if Nothing Changes?1
The Pain that Leads to Joy1
Most popular authors
Pravmir.com team344
Archpriest Peter Olsen154
Fr. Theodore Stylianopoulos139
Fr. Gabriel Bilas119
Aurelian Iftimiu44
Metropolitan Hilarion (Alfeyev)1
Fr. Andreas Agathokleous1