His Holiness Patriarch Kirill meets with Supreme Patriarch and Catholicos of All Armenians, Karekin II

Source: DECR
Natalya Mihailova | 30 April 2014
On 29 April 2014, at the Patriarchal residence in Chisty side-street, His Holiness Patriarch Kirill of Moscow and All Russia met with the Supreme Patriarch and Catholicos of All Armenians, Karekin II, who is on his working visit to Moscow. 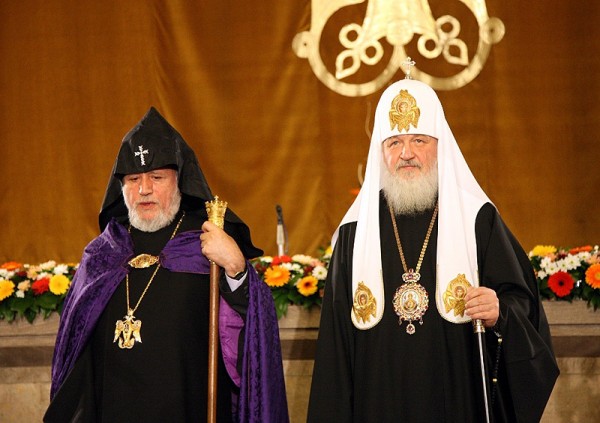 The head of the Armenian Apostolic Church greeted His Holiness Patriarch Kirill with the Holy Pascha and thanked him for his attention to the Armenian community in Moscow.

The Primate of the Russian Orthodox Church warmly greeted the high guest and noted that the Moscow Patriarchate and the Armenian Apostolic Church maintained a high level of mutual trust in their relationships.

The participants in the meeting emphasized that the mission of Christian Churches in the life of modern society was tremendously important and manifold. The Christian Churches often play a key part in preserving peace and understanding between the nations.

His Holiness Patriarch Kirill expressed his condolences to Patriarch and Catholicos Karekin II over the tragedy which had occurred in March in Kessab, a Syrian town with the predominantly Armenian population. Some issues of mutual interest were also discussed at the meeting.