Source: DECR
Natalya Mihailova | 24 January 2015
On 22 January 2015, His Holiness Patriarch Kirill of Moscow and All Russia took part in the 3rd Christmas parliamentary meetings held in the State Duma of the Federal Assembly of the Russian Federation as a part of the 23rd International Christmas Readings. 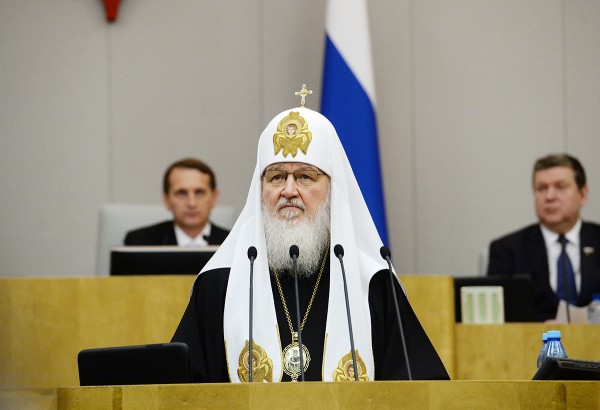 His Holiness Patriarch Kirill and Mr. Sergei Naryshkin, chairman of the State Duma, signed a protocol on cooperation between the “Russian Historical Society” Association and the Patriarchal Council for Culture, which will continue common efforts for the enhancing of educational and cultural level of the Russians, for consolidating spiritual and moral foundations of society, and preservation of historical heritage and monuments of culture.

After the ceremony, Mr. Naryshkin and Patriarch Kirill exchanged speeches. His Holiness said in particular: ‘I am deeply convinced in the importance of cooperation of the Russian Orthodox Church with all institutions and organizations dealing with history, and I would like to give prominence to the “Russian Historical Society” Association, which, though being young, has done a lot. It has helped to arouse people’ interest in history and organized many remarkable events dedicated to history.

‘History is not just a science, history is an inseparable part of life. There is neither present nor future without the past. Our national identity grows from our comprehension of history, and the consolidated national identity at present is an essential condition for the shaping of united society in Russia.’

Attending the ceremony were Metropolitan Hilarion of Volokolamsk; Metropolitan Merkury of Rostov and Novocherkassk; Bishop Sergy of Solnechnogorsk, head of the Moscow Patriarchate’s Administrative secretariat; archpriest Vsevolod Chaplin, chairman of the Synodal Department for Church-Society Relations; archimandrite Tikhon (Shevkunov), executive secretary of the Patriarchal Council for Culture; Mr. Vladimir Legoida, chairman of the Synodal Information Department; members of the Patriarchal Council for Culture and representatives of the Russian Historical Society.

The Primate of the Russian Orthodox Church and the chairman of the State Duma saw “The Russian Icon. Traditions and Contemporaneity” exhibition, exhibition of children’s works met with children, who have won prizes at the ‘The Beauty of God’s World’ competition.

After the talk, which His Holiness Patriarch Kirill and Mr. Naryshkin had at the Duma presidium chamber, they chaired the first session of the 3rd Christmas parliamentary meetings at the plenary hall.

After the session, His Holiness met with the leaders of all four parliamentary fractions.

The Christmas parliamentary meetings continued their work in three sections.