On 28 January 2014, His Holiness Patriarch Kirill of Moscow and All Russia took part in the Christmas parliamentary meetings on ‘The 700th Anniversary of the Birth of St Sergius of Radonezh. Historical Experience and Modern Mechanisms of Partner Relations between Church, State and Society in Spiritual and Moral Education. Family as a Basis of National Security.’ The meetings were held at the Federation Council of the Federal Assembly of the Russian Federation within the framework of the 22th International Educational Christmas Reedings. 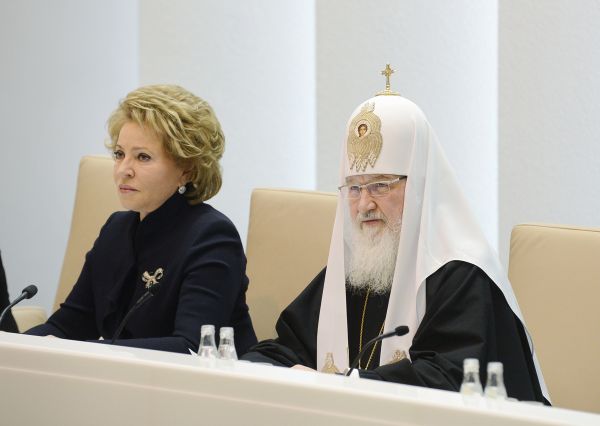 Participating in the Christmas parliamentary meetings were also permanent members of the Holy Synod: Metropolitan Juvenaly of Krutitsy and Kolomna; Metropolitan Alexander of Astana and Kazakhstan; Metropolitan Hilarion of Volokolamsk, chairman of the Moscow Patriarchate’s Department for External Church Relations; as well as hierarchs and clergymen of the Russian Orthodox Church, heads of the Synodal institutions, representatives of the traditional confessions of Russia, representatives of federal and regional authorities, and members of scientific and public organizations.

The presidium of the meeting included His Holiness Patriarch Kirill of Moscow and All Russia; Ms Valentina Matviyenko, chairperson of the Federation Council; Ms Olga Golodets, deputy prime minister of the Russian Federation; Metropolitan Merkury of Rostov and Novocherkassk, chairman of the Synodal Department for Religious Education and Catechization; and Mr. Alexander Troshin, first deputy chairperson of the Federation Council. 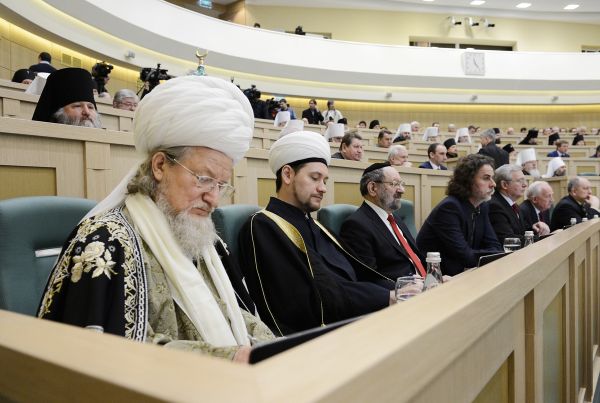 Ms Valentina Matviyenko opened the meeting. She thanked Patriarch Kirill for his “great personal contribution to the development of inter-ethnic and inter-religious relations in the country, as well as for his service as a spiritual leader in the joint work of the Russian Orthodox Church, the state and the public institutions in the sphere of culture and education, and in strengthening family values.”

“We have recently seen the fruit of this work when the Russian people had an opportunity to venerate one of the Christian shrines – the Gifts of the Magi. Hundreds of thousands of people have taken part in this radiant and festive event which has profound historical and spiritual significance,” Ms Matviyenko said.

“Discussed today will be the ways to strengthen the relations between the state, the society and the Russian Orthodox Church in the sphere of culture and education, including spiritual and moral education. I believe that the parliamentarians and the hierarchs of the Russian Orthodox Church will have a constructive dialogue,” the head of the Federation Council added. “… I think it will be right to suggest that our Christmas parliamentary meetings should be held on a regular basis. Our meetings should become an efficient mechanism of promoting harmonious relations between the Church, the state and the society.”

His Holiness Patriarch Kirill addressed all those present with his word.

Ms Zinaida Dragunkina, chairperson of the Federation Council Committee on Science, Education, Culture and Information Policy, presented the Joint Address by the Participants in the Christmas Parliamentary Meetings.