Source: DECR
Natalya Mihailova | 17 February 2015
On 13 February 2015, His Holiness Patriarch Neofit of Bulgaria met with the delegates from the Russian Orthodox Church who arrived in Bulgaria with the blessing of His Holiness Patriarch Kirill of Moscow and All Russia to take part in commemorative events marking the 65th anniversary of the demise of Archbishop Serafim (Sobolev; 1881-1950), rector of the Russian church in Sofia and dean of the Russian parishes in Bulgaria in the period from 1921 to 1950. 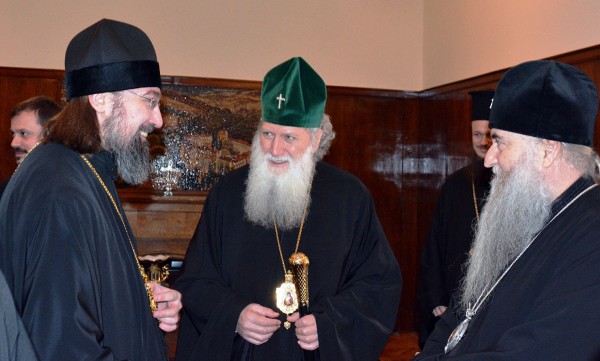 The delegation is led by Metropolitan Longin of Saratov and Volsk. He is accompanied by the Rev. Alexander Chebotarev and Mr. A. Perepelitsyn.

Taking part in the meeting were also Metropolitans Joan of Varna and Veliky Preslav and Seraphim of Nevrokop; archimandrite Gerasim (Georgiev), chief secretary of the Holy Synod of the Bulgarian Orthodox Church; archimandrite Dionisy (Mishev), head of the Liturgical department of the Holy Synod; archimandrite Philip (Vasiltsev), rector of the Church of St. Nicholas the Miracle-worker – the metochion of the Patriarch of Moscow and All Russia in Sofia; and other persons.

Patriarch Neofit greeted the guests, expressed his joy over their arrival, hope for success of the commemorative events, and confidence that they will become annual.

Metropolitan Longin told those present about church life in the Saratov diocese and shared with them his thankful reminiscences of his studies at the Theological Faculty of the St. Clement of Ohrid University of Sofia led at that time by Bishop Neofit, now His Holiness the Patriarch of Bulgaria. Metropolitan Longin invited representatives of the Bulgarian Orthodox Church to visit his diocese.

Discussed at the meeting was the topic of education, including the exchange of students.