Source: Greek Reporter
Natalya Mihailova | 13 January 2016
Hollywood actor Jonathan Jackson, star of the legendary US soap opera General Hospital, has released a pop-rock album along with his band Enation, titled “Basileia ton Ouranon,” which explores the theme of Orthodoxy. The album was sponsored by the Greek Orthodox Vatopedi Monastery and Abbot Ephraim. 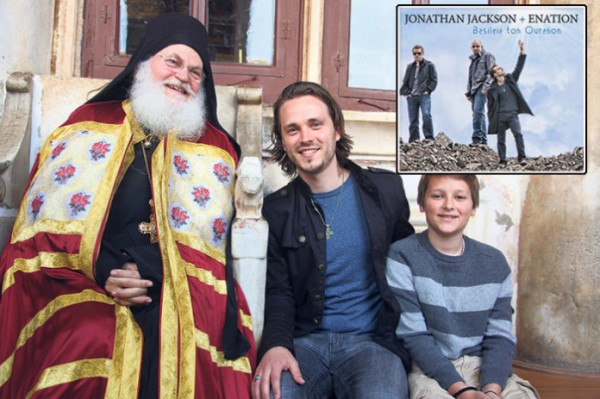 Internet radio broadcaster Pemptousia FM of Vatopedi Monastery on Mount Athos, Greece, helped produce the album. “Bob Dylan said that the highest form of song is prayer. And I believe that. And Bob Dylan and Bono and some of those artists also said that the best songs are not written by us. They’re discovered. They’ve already been written and we just discover them. So, we are dependent on God walking in the room, so to speak, in order to make something of real value. And the prayer for me is for the music and lyrics to create an atmosphere, for some kind of healing to take place, some kind of awakening, yearning. So it’s not written just for people that are Christians, it’s for anybody. And I want the music and lyrics to speak to people no matter where they are,” Jackson said to Pemptousia FM.

The Jackson family embraced Orthodoxy in 2012, which according to the popular actor was “a conscious decision.”

Apart from his career in the small and big screen, Jackson has been involved in the music industry since 2002 with his band Enation. The popular artist is the composer and lyricist of the band. As he said that the 16 songs included in the album “Basileia ton Ouranon” were selected with the help of the Vatopedi Monastery monks.