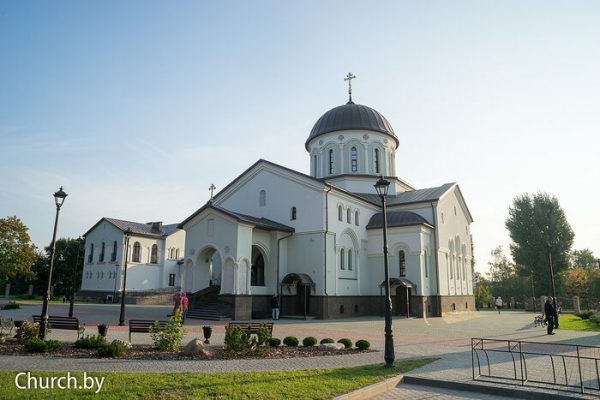 On Saturday, September 26, on the eve of the feast of the Exaltation of the Precious and Lifegiving Cross of the Lord, His Eminence Metropolitan Veniamin of Minsk, the newly-appointed Patriarchal Exarch of All Belarus, together with His Grace Bishop Pavel of Stolbtsy and Molodechno and a host of clergy, consecrated the Church of the Exaltation of the Cross in Minsk. The church was built on the site of the former Stalag 352 camp, where the nazis killed more than 80,000 soviet prisoners of war from 1941 to 1944, and is especially devoted to preserving the memory of the innocents killed there, reports the site of the Belarusian Orthodox Church.

The video below shows the consecration of the church and the altar table:

During the Divine Liturgy following the consecration, special prayers were offered for peace in Belarus and for an end to the coronavirus pandemic.

Following the Liturgy, Metropolitan Veniamin congratulated those present on the consecration of the new Holy Cross Church, and all those involved in its construction were given awards from the Belarusian Church.

In turn, the rector of the church, Fr. Oleg Kuntsevich, presented Metropolitan Veniamin with a pectoral cross and two episcopal Panagias. Bishop Pavel also congratulated everyone on the glorious event and presented Fr. Oleg with a blessing cross.

In memory of the event, all the parishioners were given copies of the book … And God Will Wipe Away Every Tear by Nikolai Gavrilov, dedicated to the tragedy of the Stalag 352 camp.

The new church complex also includes a museum commemorating the victims of nazism.