“Holy Fire” to be taken to monasteries in Kosovo

Source: B92
Natalya Mihailova | 13 April 2015
BELGRADE -- The Holy Fire, which arrived in Belgrade ahead of Orthodox Easter Sunday from Jerusalem, will on Monday will be taken to Kosovo and Metohija. 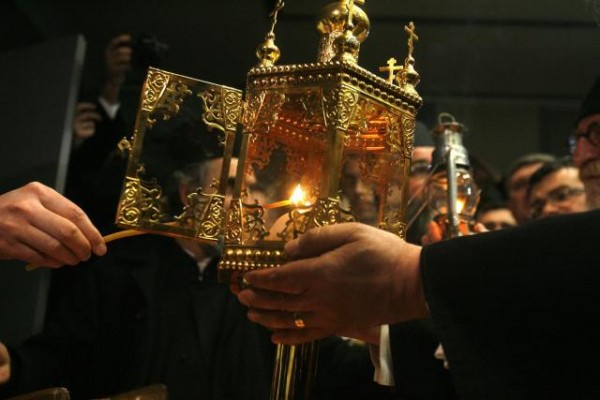 The fire, which believers consider to be a miracle, will be taken to the Serb Orthodox Church (SPC) monasteries in Gracanica and Decani, and then the Pec Patriarchate.

A sample of the fire, said to occur spontaneously in the Church of the Holy Sepulchre in Jerusalem every year a day before Orthodox Easter, arrived in Serbia on April 11 and was welcomed by a state and Church delegation.

The fire was handed over to Patriarch Irinej in front of the Temple of Saint Sava in Belgrade, with the Serbian Army Guards and top state officials taking part in the ceremony, and was then “distributed to the gathered citizens.”

The Holy Fire was transferred to Serbia with the blessing of Serbian, Russian and Jerusalem patriarchs, and with the help of the Russian Church and Russian foundations.

Beside Belgrade and Kosovo, the Holy Fire will also be taken to several towns in the region, including Podgorica, Mostar, Banja Luka, and Pakrac.