Holy mass held in Homs for peace in Syria and Iraq

Source: Syrian Radio & TV
Natalya Mihailova | 19 August 2014
For the sake of restoring peace in Syria and Iraq and the return of two abducted bishops, a holy mass was held on Monday in Wadi al- Nadara area in Homs province led by Mor Ignatius Aphrem II, Patriarch of Antioch and All the East and Supreme Head of the Universal Syriac Orthodox Church with the participation of Patriarch John X Yazigi of Antioch and All The East for Rome Orthodox. 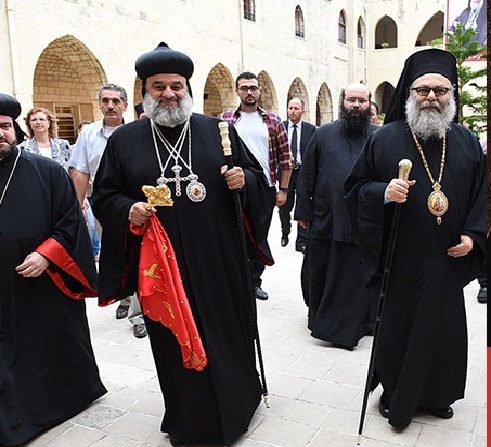 Patriarch Yazigi pointed out in a speech that Syria, through the will of its honest citizens, will rise again and will bury all those who conspired against it, stressing that Syria’s salvation is through dialogue and political solutions.

For his part, patriarch Aphrem II stressed this holy mass is held for the sake of the return of the two abducted bishops, Paul Yazigi and John Ibrahim, and all abducted people and for the sake of restoring peace and stability to Syria.

He called on all displaced people to return to their homes and villages after security and stability were restored thanks to the sacrifices of the Syrian Arab Army and the blood of the martyrs.

Patriarch Aphrem asserted that today’s mass is also a message to the world stating that Syrians, Christians and Muslims, are united people.

Governor of Homs, Talal al-Barazi, pointed out to the need to affirm the unity and adherence of the Syrians for the return of the displaced people and the social fabric.