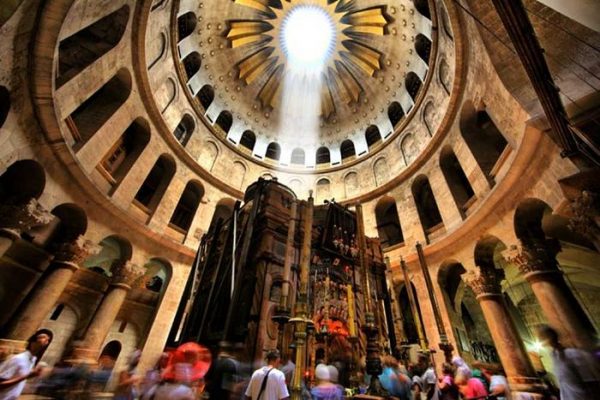 The three churches previously cooperated on the successful first phase of restoration that cleaned and reinforced the walls of the Holy Edicule—the edifice over the Lord’s Tomb—which was completed in 2017.

There will be four areas of work: conservation and restoration of the floor of the Basilica; evaluation of the stability and securing of the Holy Edicule; implementation of technical facilities (plumbing, electric, mechanical, fire prevention) and archaeological research.

The technical and scientific committee is made up of the Fondazione Centro per la Conservazione ed il Restauro dei Beni Culturali “La Venaria Reale” of Turin (CCR) and the Department of Studies in Antiquity of “La Sapienza” University of Rome, which signed an agreement with the Custody of the Holy Land on October 8 for the study and final project of the necessary restoration work.

In May, the leaders of the three churches signed an agreement to undertake phase 2 of the restoration.

“To implement the technical structures useful for the religious who live in the Holy Sepulchre and the large number of pilgrims who pass through it every day, the current situation will be analyzed in terms, for example, of temperature, humidity and concentration of pollution. After having defined the improvements necessary and the needs expressed by the resident Christian Communities, alternative solutions to the problems will be sought,” the report reads.

The presented projected will be funded by a $500,000 donation from a benefactor.

Patriarch Theophilos of Jerusalem was very pleased with the proposal: “As a Church, it is important that we are committed to protecting and preserving the autonomy of the Holy Sepulchre, which is also good for our Christians. The presentation of this project is therefore important for us, but also for transparency, which can give us credit and trust with our sponsors.”