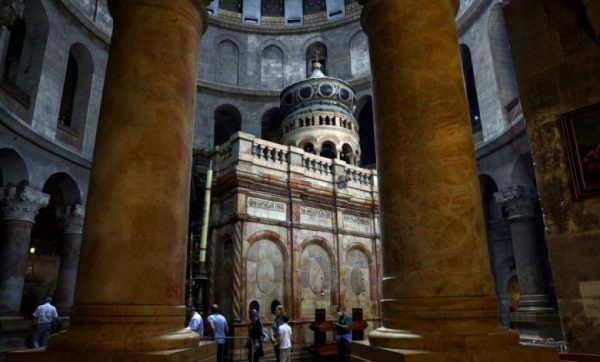 Pressed against a wall in a back corridor of Jerusalem’s Church of the Holy Sepulchre, a stone slab bore testimony only to the graffiti etched on it by multitudes of pilgrims through the ages.

But the 2.5 x 1.5 metre stone turned out to be far more precious when its other side was exposed during recent renovations at the church – the traditional site of Jesus’s crucifixion and burial.

Researchers believe the elaborate looping ornaments they found on the long-hidden part of the slab indicate it was once the decorated front of a medieval high altar that took pride of place centuries ago in one of Christianity’s holiest sites, reports the Vema with a link to ekathimerini.com.

“You cannot see it now, but originally it was inlaid with pieces of precious marble, pieces of glass, pieces of small, finely made marble,” said Amit Re’em, Jerusalem regional archaeologist for the Israel Antiquities Authority.

“It was shining and this was a really amazing artefact,” said Re’em, who conducted the research with Ilya Berkovich of the Austrian Academy of Sciences.

They identified the unique decoration method as “Cosmatesque”, which combines Classical, Byzantine and early Islamic art in which finely cut tiles of colourful marble are used to fill in circular engravings on the stone.

“It stood at the apex, at the sanctuary of the Church (of the Holy Sepulchre),” Re’em said.

“All the eyes of the believers, of the pilgrims, (went) to this object. And right above it and around it, all the high priests, the priests and the monks of the church did all the liturgy, the main liturgy of the church, on the table, right here on the table of this altar,” he said.

Similarly decorated altars have been found inside churches in Rome dating to the 12th and 13th centuries, the researchers said.

They believe the relic in Jerusalem corresponds with past archaeological findings and with pilgrims’ accounts of the consecration of the church by the Crusaders and the forming of its main altar in 1149.

The altar was used by the Catholic clergy to celebrate mass until the Crusaders left Jerusalem, Re’em said. Afterwards it was used by the Greek Orthodox church until it was damaged in a fire in 1808, cast aside and forgotten until the recent renovations, he said.

Archbishop Aristarchos of Constantina, the chief secretary of the Greek Orthodox Patriarchate of Jerusalem, welcomed such research at the church.

The researchers’ findings are due to be published by the end of the year by Israel’s Exploration Society.