Source: OCA
Natalya Mihailova | 24 October 2014
The fall session of the Holy Synod of Bishops of the Orthodox Church in America was held at the Chancery here October 21-23, 2014. 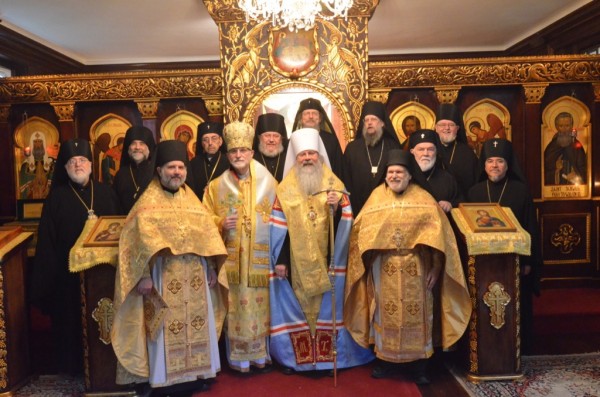 On its opening day, the Holy Synod elected His Grace, Bishop Irénée to the vacant Episcopal See of Ottawa and Canada and Igumen Paul [Gassios] to the vacant See of Chicago and the Midwest.  Igumen Daniel [Brum] was elected Bishop of Santa Rosa and Auxiliary for the Diocese of the West.  [See related story.]

In his opening address, His Beatitude, Metropolitan Tikhon addressed the newly elected and reviewed the current status of the Church.

“We offer our expressions of ‘Axios’ to the newly elected members of the Holy Synod and welcome them to our fall session,” Metropolitan Tikhon said.  “I think that I speak for all the brothers and for the entire Church in expressing our great joy.  I offer our prayers and hopes for fruitful ministries in your dioceses and in pastoral and administrative work.  In addition, we also know that, at least in the cases of Canada and the Midwest, each of your flocks has been waiting patiently for a shepherd to guide them, and I would exhort each of you to approach your new responsibilities with sobriety, humility and above all, love for your flock.

“I am also very pleased that, with today’s elections, there remains only one vacant diocese in the Orthodox Church in America—the Diocese of the South—and it is our hope that the nomination of a new bishop for that diocese will take place next February,” Metropolitan Tikhon continued.  “In any case, it has been a long time since we have had so few vacancies, and I believe that this gives expression to the continuing establishment of stability in the Orthodox Church in America and offers the foundation for all of us to fulfill the Apostolic work of Christ.”

After offering congratulations to His Eminence, Archbishop Nathaniel on the 35th Anniversary of his Episcopacy, Metropolitan Tikhon reviewed his work since the Holy Synod’s spring 2014 session, highlighting the contacts he has had with the retired bishops.  He spoke of the recent work of the Holy Synod, Chancery staff, and ORSMA, and addressed a number of legal and pastoral issues and matters of external affairs.  He also reviewed ongoing projects, including drafts of the Holy Synod handbook and the Instructions and Procedures for the Selection, Nomination and Election of Bishops.

According to Archpriest Eric G. Tosi, OCA Secretary, the members of the Holy Synod

The members of the Holy Synod will address a letter to all seminaries and formation programs restating their insistence that all candidates must be members of the OCA for three years prior to their acceptance into programs leading to ordination.  The hierarchs conveyed their gratitude to Archdeacon Kirill Sokolov, Director of the Diaconal Vocations Program, for his work in preparation for the Board of Theological Education’s meetings.

Bishop Mark presided at the celebration of Thursday’s Divine Liturgy for the Feast of the Apostle James, after which Bishop-elect Paul and Bishop-elect Daniel were elevated to the dignity of Archimandrite.  Prayers were also offered for the late Mr. Gregory Sulich, a long-time Chancery employee, on the first anniversary of his repose.

Minutes, reports and related resources will be posted as they become available.

A photo gallery may be viewed on the OCA web site and Facebook page.