Source: ROROC
Natalya Mihailova | 20 July 2016
A meeting of the Synod of Bishops of the Russian Orthodox Church Outside of Russia on June 18/July 1, 2016, held in San Francisco, on the eve of the celebration of the 50th anniversary of the repose of St John of Shanghai and San Francisco, HEARD: 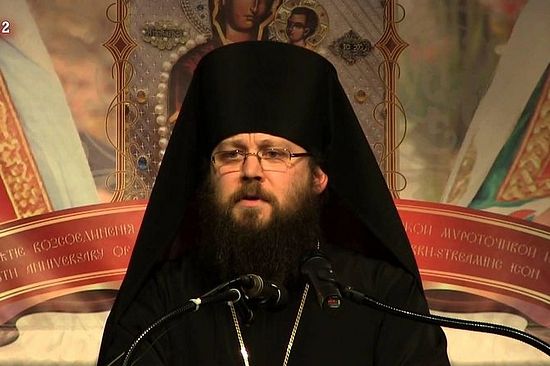 The intercession of Archbishop Kyrill of San Francisco and Western America, Secretary of the Synod of Bishops, proposing the election of Archimandrite Irinei (Steenberg), a clergyman under the service of His Eminence in his diocese (a candidate for the episcopacy by decisions of the Council of Bishops of ROCOR of 2011 and 2014) as Bishop of Sacramento, Vicar of the Western American Diocese.

1) Having deliberated on the materials of the Councils of Bishops of 2011 and 2014, with the results of the recent survey of the hierarchs who are not members of the Synod of Bishops, and discussing exhaustively the intercession of Archbishop Kyrill of San Francisco and Western America, deems Archimandrite Irinei (Steenberg) elected as Bishop of Sacramento, Vicar of the Western American Diocese.

2) In accordance with the Act of Canonical Communion of 2007, to send an appeal to His Holiness Patriarch Kirill of Moscow and All Russia and the Holy Synod of the Russian Orthodox Church to confirm this election.

3) In the event of a positive resolution by His Holiness and the Holy Synod, to perform the episcopal consecration of Archimandrite Irinei (Steenberg) at the Cathedral of the Mother of God “Joy of All Who Sorrow” in San Francisco, CA, on Sunday, November 6, 2016, and to declare the election on the eve of that date at the same cathedral.

On Friday, July 15, during a meeting of the Holy Synod of Bishops of the Russian Orthodox Church, presided over by His Holiness the Patriarch of Moscow and All Russia, the election of Archimandrite Irinei (Steenberg) to the episcopacy was confirmed.

Archimandrite Irenei was born Matthew Craig Steenberg on 7 December 1978 on the American Naval Base in Okinawa, Japan, where he lived the first year of his life before moving to the United States. The majority of his childhood was spent in the USA (in Moscow, Idaho), with time spent in Germany, France and the UK, and a portion of his schooling taking place in Brussels, Belgium. He took a double BA degree in Classics and Religion, then moved to the UK on a Marshall Scholarship to obtain a Masters Degree and then Doctorate in Patristic Studies and Church History from the University of Oxford. Upon completion of his research he was a teaching Fellow in Theology at Oxford, lecturing on Patristics, Church History and Orthodox Theology, until 2007, when he was made Chair and Professor of Theology and Religious Studies at Leeds Trinity University, a post which he held until 2010.

Having been tonsured reader and served as choir conductor in Oxford, Fr Irenei assisted in the establishment in 2006 of a new Russian Orthodox parish in the same city, dedicated to St Nicholas the Wonderworker. In 2007 he was ordained deacon on the Feast of the Dormition of the of the Theotokos. In 2010 he was invited by His Eminence Archbishop Kyrill of San Francisco and Western America to move to San Francisco to establish a new Institute of Higher Education in Orthodox Studies, and moved to California to begin this work. On the 8th of March 2010 (the feast day of St Polycarp of Smyrna) he was tonsured a monastic in the Brotherhood of St Ignatius at St Tikhon’s Orphanage Church (the home of St John of Shanghai and San Francisco) in San Francisco, being given the name of St Irenaeus the Hieromartyr of Lyons — to whose life and works Fr Irenei had dedicated so much of his own scholarly work. The following Sunday (the Fourth Sunday of Great Lent, dedicated to St John of the Ladder) he was ordained Hieromonk at the Cathedral of the Holy Virgin by His Eminence Archbishop Kyrill of San Francisco and Western America, and assigned as a cleric of St Tikhon’s Church in the same city. On the Feast of St Tikhon of Zadonsk, 2011, Hieromonk Irenei was elevated to the rank of Archimandrite by decision of the Holy Synod of Bishops of the Russian Orthodox Church Outside of Russia.

In his service to the Church he works as the Dean for Monastic Life of the Western American Diocese of the ROCOR (appointed 2012); a member of the Education Department of the Diocese and of the ROCOR (appointed by Metropolitan Hilarion of New York in 2014); and of the Synodal Biblical and Theological Commission of the Moscow Patriarchate (appointed by the Holy Synod, 16th April 2016). In 2012, the new Sts. Cyril & Athanasius Institute for Orthodox Studies began operation with the blessing of the Holy Synod, with Archimandrite Irenei as its director. Since 2012 he has served on the Secretariat of the Assembly of Bishops of the United States, and worked in close cooperation with hierarchs of the ROCOR and the Moscow Patriarchate in matters relating to the Episcopal Assemblies and other inter-Orthodox contexts. From 2014 Archimandrite Irenei assisted in the founding of the new men’s monastery in Sonora, California, dedicated to the memory of St Silouan of Mt Athos, and at the official foundation of the monastery on the Saint’s feast day in 2015 was appointed its Abbot.

Though an academic by training, Fr Irenei has a deep love for the youth of the Church, and long taught in Church school, helped organise the annual St Seraphim Orthodox Youth Summer Camps in Britain, and helped develop Child Welfare policies at the diocesan level. He has written several books and numerous articles on the Holy Fathers, Patristic studies, Orthodox spirituality and life, and Church and Russian history as well as hosting regular radio broadcasts on Orthodox spiritual life.

Most viewed articles
Metropolitan Hilarion Speaks on Whether It Is Possible for ROC to Reunite with Old-Believers242
The Temple of Woke: Are Universities Basically New ‘Religious’ Training Centers?132
Businessman Buys a 19th Century Church and Returns It to the Faithful91
Turning Trials Into Hope71
Metropolitan Onuphry: People Get Strength for Life and Salvation in the Church64
Russian and Arabian Clergymen Celebrate the Memory of Prophet Elijah in Israel55
Did God Really Order a Genocide?42
Most popular authors
Pravmir.com team452
Eric Hyde132
Fr. James Guirguis71
Archpriest Lawrence Farley40