Source: OCA
Natalya Mihailova | 17 June 2015
The annual retreat of the Holy Synod of Bishops of the Orthodox Church in America concluded on June 11, 2015. 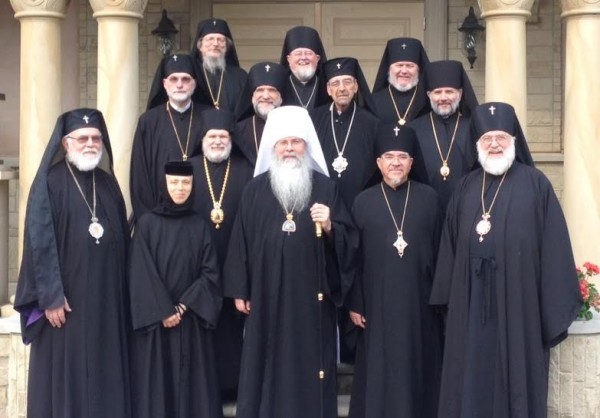 Members of the Holy Synod with Mother Gabriella, Abbess of Holy Dormition Monastery.

In addition to participating in the daily cycle of services at Holy Dormition Monastery, Rives Junction, MI, retreat site, and reflecting on a number of spiritual themes, including that of the forthcoming 18th All-American Council, the hierarchs engaged in sessions of a practical nature.

Highlights of these sessions include the following.

– In his opening report, His Beatitude, Metropolitan Tikhon, reflected on the positive role of the OCA in the Assembly of Canonical Orthodox Bishops and beyond.  He noted that he would be visiting the Ecumenical Patriarchate on Tuesday, June 16, with the members of the Assembly’s Executive Committee.  [See related story.]

– It was decided to issue a letter releasing the Former Archbishop of Washington, Metropolitan Jonah, to the Russian Orthodox Church Outside of Russia.  His release becomes official with his receipt of said letter.

– The hierarchs reaffirmed their full support for the Statute revision slated to be presented at the 18th All-American Council.  Parishes are encouraged to share and review proposed revisions prior to the AAC.  They also expressed support for the revised resolution on Finances.

– The hierarchs decided that all monastics are to be formally enrolled in their respective monasteries with appropriate records to be kept by the monasteries and diocesan hierarchs.  Monastics not in residence at a monastery are to be enrolled in the diocese in which they reside.  Diocesan bishops will see to the spiritual care of monastics.  Likewise, it was decided that all retired military chaplains, upon their release from military service, will be transferred from the omophorion of the Metropolitan to the omophorion of the bishop in whose diocese they reside.

– The members of the Holy Synod heard a report from Archpriest Leonid Kishkovsky on current events in world Orthodoxy.

Most viewed articles
The Authenticity of the Vision of Christ in the Life of Saint Silouan121
Epistle of the Council of Bishops of the Russian Orthodox Church Outside of Russia105
Living with Cunning People81
“A New Creation” Through the Cross of the New Adam66
The work of the Church in society is quiet, but full of hope and love, says the Director of Lumina Publications37
Most popular authors
Archimandrite Zacharias Zacharou121
Pravmir.com team105
Fr. Andreas Agathokleous81
Priest Philip LeMasters66
Ștefana Totorcea37