Source: DECR
Natalya Mihailova | 23 October 2015
On 22 October 2015, a regular session of the Holy Synod of the Russian Orthodox Church began at the Patriarchal and Synodal residence in St Daniel’s Monastery in Moscow under the chairmanship of His Holiness Patriarch Kirill of Moscow and All Russia. 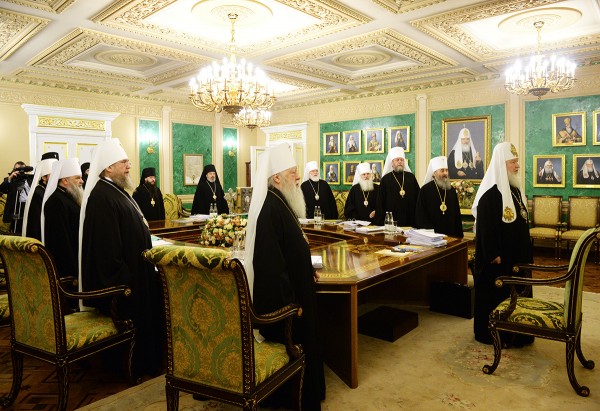 In his opening address, the Primate of the Russian Orthodox Church dwelt on the main agenda items.

As His Holiness Patriarch Kirill informed the members of the Holy Synod, during the session they will discuss the convening of the Bishops’ Council of the Russian Orthodox Church, due to be held next year, and the participation of the Moscow Patriarchate in the Pan-Orthodox Council, scheduled for 2016.

According to His Holiness, among the items on the agenda of the meeting are the approval of texts of new divine services, establishment of new dioceses and monasteries, and consideration of candidates for episcopal consecration.

Invited to take part in the winter session (September-February) are Metropolitan Isidor of Smolensk and Roslavl, Archbishop Feodor of Mukachevo and Uzhgorod, Bishop Marchel of Bălţi and Făleşti, Bishop Ioann of Magadan and Sinegorye, and Bishop Varlaam of Makhachkala and Grozny.