Source: DECR
Natalya Mihailova | 16 July 2015
July 13, 2015 – the Holy Synod of the Russian Orthodox Church met for its regular session at the historic building of the Sacred Governing Synod in St Petersburg. The session was chaired by His Holiness Patriarch Kirill of Moscow and All Russia. 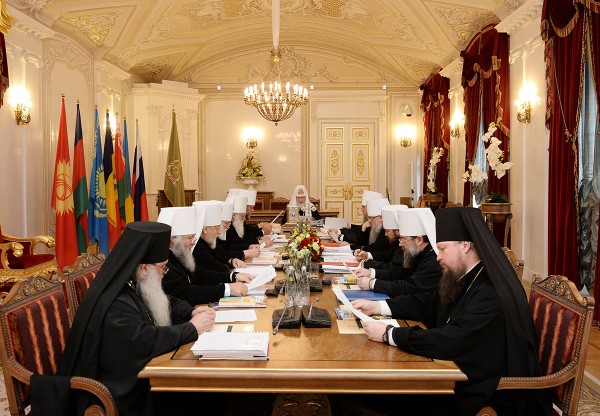 The Holy Synod considered the results of the Patriarchal visits to the ROC dioceses in Russia and Belarus, which took place from June 20 to 22, 2015.

The chairman of the Department for External Church Relations, Metropolitan Hilarion of Volokolamsk, informed the Synod about the 20th meeting of the Working Group for Cooperation between the Russian Orthodox Church and the Ministry of Foreign Affairs and made a report on his trips to the People’s Republic of China, the Vatican, Italy and Turkey.

The Synod heard the report by Metropolitan Hilarion of Volokolamsk as chairman of the Synodal Biblical-Theological Commission on the results of examination of the draft documents prepared for the Pan-Orthodox Council, namely, ‘The Orthodox Church’s Contribution to the Triumph of Peace, Justice, Freedom, Brotherhood and Love among Nations and to the Elimination of Racial and Other Forms of Discrimination’ and ‘Importance of Fasting and Its Observance Today’ as edited by the Special Inter-Orthodox Commission at its meetings on February 15-20 and March 30 – April 2, 2015, in Chambesy, Switzerland; and on the proposals made by the Synodal Biblical-Theological Commission for improving these documents.

The Holy Synod resolved that the document ‘Importance of Fasting and Its Observance Today’ and the proposals of the Synodal Biblical-Theological Commission for its further improvement be approved as a whole. It was also decided that the draft document on ‘The Orthodox Church’s Contribution to the Triumph of Peace, Justice, Freedom, Brotherhood and Love among Nations and to the Elimination of Racial and Other Forms of Discrimination’ be considered unacceptable in its present form. The delegation of the Russian Orthodox Church was instructed to present principled amendments to the document to the Pan-Orthodox Pre-Council Conference.

To enforce the conceptual document adopted by the 2013 Bishops’ Council on ‘The Russian Orthodox Church’s Position on Pressing Ecological Problems’, the Synod resolved that the first Sunday of September be an annual day of special prayer for God’s creation and that ‘the office of the prayer for the preservation of God’s creation as presented by the Synodal Liturgical Commission be approved’.

Having heard the information from His Holiness Patriarch Kirill about the 5th season of the SS Cyril and Methodius Patriarchal Literary Prize, the Synod thanked the Patriarchal Prize’s guardians and experts for the work they had carried out to select nominees and choose the winner and the Publishing Board for organizing the prize.

The Synod approved the program of cultural and educational events to mark the millennium of the Russian presence on Holy Mount Athos in the ROC educational institutions and resolved that the memory of the Most Orthodox Prince Dimitry Donskoy and Princess Evdokia be celebrated on June 1 (May 19).

The Synod also considered the proceedings on the establishment of a ROC Commission on Church Art, Architecture and Restoration and on introduction of amendments to the Office of the Sunday of All Saints Who Shone Forth in the Russian Land.

Most viewed articles
The Authenticity of the Vision of Christ in the Life of Saint Silouan120
Epistle of the Council of Bishops of the Russian Orthodox Church Outside of Russia103
Living with Cunning People78
“A New Creation” Through the Cross of the New Adam66
The work of the Church in society is quiet, but full of hope and love, says the Director of Lumina Publications35
Most popular authors
Archimandrite Zacharias Zacharou120
Pravmir.com team103
Fr. Andreas Agathokleous78
Priest Philip LeMasters66
Ștefana Totorcea35