Source: OCA
Natalya Mihailova | 26 October 2015
During their annual fall session in Detroit, MI October 19-23, 2015, the members of the Holy Synod of Bishops of the Orthodox Church in America canonically deposed the retired Archbishop Seraphim from the status and all sacred functions of the episcopacy, removed him from the ranks of the clergy, and returned him to the status of a lay monk. 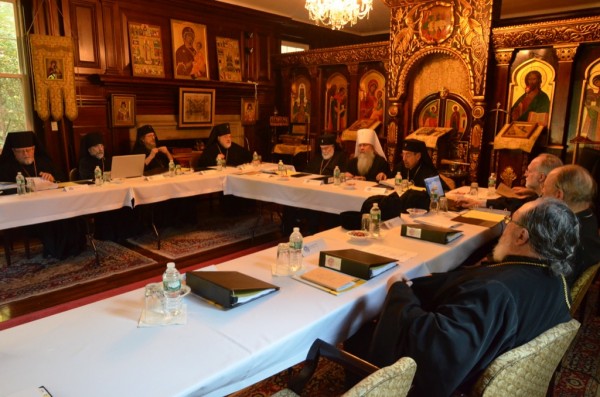 The letter of His Beatitude, Metropolitan Tikhon to the Archdiocese of Canada reads as follows.

To the Clergy, Monastics and Faithful of the Archdiocese of Canada,

May the grace of our Lord Jesus Christ, the love of God the Father, and the communion of the Holy Spirit be with you all.

The Holy Synod of Bishops of the Orthodox Church in America has concluded its Fall Session, held during the past week in Detroit, Michigan. One of the most difficult tasks of that meeting was the convening of the Synodal Court in Windsor, Ontario, to hear the case of the former Archbishop of Ottawa and Canada, His Eminence, Archbishop Seraphim. After much prayerful and intense deliberation, the Synodal Court determined that Archbishop Seraphim should be deposed from the episcopacy, removed from the ranks of the clergy and returned to the status of a simple monk.

The Holy Synod made this decision with much sorrow, but with the conviction that it was a necessary action both for the salvation of the now Monk Seraphim and for the preservation of the good order and stability of the flock of Christ. At the same time, we offer our prayers for the victims, their families and all those who have been affected by the events surrounding this case.

We acknowledge the anguish that has been expressed by many who love and support their former pastor and understand that some may feel that our actions were unfair. Nevertheless, every bishop, as the shepherd of his flock, is called upon to place his own needs in the second place and to provide care to all, especially those who have been wounded or hurt in any way.  Sexual abuse is a sad reality of our fallen world, one that destroys the lives of many victims and is a manifestation of the brokenness of our world that is in need of healing.

The bishops have a God-given responsibility to address the wounds of those suffering and to help bring them to healing. We are bound to this primarily by the Gospel of Jesus Christ and by the canonical tradition of the Church. Therefore, we must always take allegations seriously and respond in the proper pastoral way for all concerned.

We express our love and concern for all the faithful of the Archdiocese of Canada, which has endured much turmoil over the past several years because of this difficult situation. We ask you to exercise discernment in processing these events and, above all, to have recourse to prayer, so as to not be weighed down with emotion, but rather seek to attain the peace of Christ.

May our merciful and loving God strengthen all of us to do His will in all things and to preserve in our hearts the grace of the Holy Spirit, who is everywhere present and fills all things.

Sincerely yours in Christ,
+TIKHON
Archbishop of Washington
Metropolitan of All America and Canada