Source: DECR
Natalya Mihailova | 26 December 2014
On December 25, 2014, the Holy Synod of the Russian Orthodox Church began its last session in 2014 at the Patriarchal and Synodal Residence in St. Daniel’s Monastery in Moscow. It is chaired by His Holiness Patriarch Kirill of Moscow and All Russia. 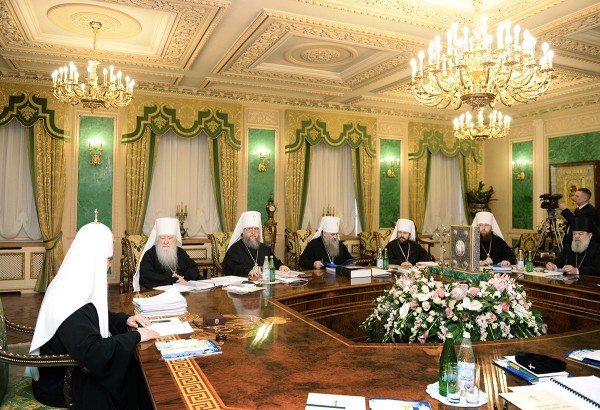 Before the session, Patriarch Kirill spoke briefly on major items of the agenda. He said in particular, ‘We are to sum up the work carried out in various areas and to evaluate a number of events which took place this year and to discuss and adopt several legal documents. Finally, we are to make a decision on the election of several candidates to episcopate’. In addition, he said, the Holy Synod was to consider the establishment of new dioceses of the Russian Orthodox Church.

Summoned for the 2013 winter session are Metropolitan Feodor of Keenest-Podolsk and Gorodok, Metropolitan Ignaty of Vologda and Kirillov, Archbishop Simon of Brussels and Belgium, Bishop Nikodim of Yedinets and Briceni, and Bishop Artemy of Petropavlovsk and Kamchatka.

Most viewed articles
Number of Christians Murdered for Faith Rose 60 Percent in 2020: 50 Most Dangerous Countries to Be a Christian162
Admitting That We Hate158
Funeral for Metropolitan Philaret Held in Minsk103
Building a Fire and Preparing for Theophany80
Churches to Reopen in Greece on January 1842
God Is With Us… And Nothing Else Matters31
I Have Fought the Good Fight, I Have Completed the Race17
Most popular authors
Charlene Aaron162
Archpriest Michael Gillis158
Pravmir.com team144
Fr Gregory Scratch80
Fr. Gabriel Bilas31
Metropolitan Hilarion (Alfeyev)17
Maria Trushanina1