Source: St. John Orthodox Church
The best way to support others is to actually go to them in person. That’s the way the Father, Son, and Holy Spirit did it: The Second Person of the Most Holy Trinity, God the Son, came to this earth as the man Christ Jesus. He never claimed that He would protect us from horrible things, but He did subject Himself to those same horrible things.
Priest Aidan Wilcoxson | 05 July 2014 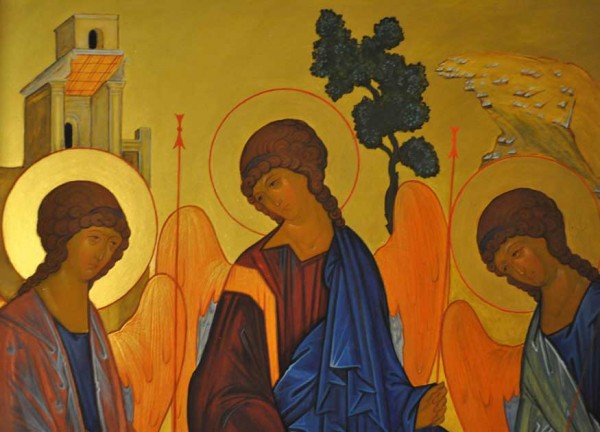 So, the topic for this round table is “How much involvement does God have in the minutiae of our lives?” To illustrate the subject, our editor, Scott Coleman, shared with us a short, imaginary dialogue between God and a person who has had a bad day. Scott said that the dialogue has been around for years, but he’s recently seen it quite a bit on Facebook. Anyway, in this conversation, the person who has had a bad day complains about some pretty normal (and pretty trivial) things: her alarm failed to go off, and she got the wrong sandwich at lunch, and then her new foot massager wouldn’t work. However, God lets this person know that, through those inconveniences, she was saved from far worse things: a power outage, an illness, and even death.

I guess the first thing I would say about that dialogue is that it sounds like the sort of thing that you run across on Facebook. I don’t have an account, but folks forward that kind of thing to me all the time via email, and it’s usually accompanied by photos of kittens and sunsets and blooming flowers. The people who send me that material are trying to be encouraging; they are trying to remind me that the Most Holy Trinity is always at work in our lives, and, the way I look at it, if that sort of spirituality helps you get closer to the Father, Son, and Holy Spirit, then, hey, that’s great.

However, before you track down that dialogue and send it to everyone on your contact list, it’s important to know that there are a whole lot of people that will actually be discouraged by that kind of stuff. For example, lots of folks are never able to have a conversation with the Most Holy Trinity. It’s not that they haven’t tried; they’ve tried more times than they care to admit. And every single time, what happens is not an intimate question and answer session but a monologue—it’s just them talking to the ceiling or the windshield or the darkness. That doesn’t mean that the Father, Son, and Holy Spirit aren’t always listening to these people, but it does mean that, for whatever reason, prayer is frustrating for them, and when we make it sound like we can Insta-Message the Most Holy Trinity then that’s only going to leave them feeling even more excluded.

But, for some folks, that dialogue is not only going to be frustrating, it’s going to strike them as positively obscene. Because not only are they unable to have cozy conversations with the Most Holy Trinity about their foot massager and their alarm clock, they can’t get the Father, Son, and Holy Spirit to stop horrible things from happening to them. Things like cancer and car accidents and rape and verbal abuse; things like birth defects and unemployment and bullying and addiction. So, it’s simply cruel to tell these people that the Most Holy Trinity is micro-managing our lives to keep us from being inconvenienced by things like the occassional power outage.

Bottom line: If you want to really encourage someone, don’t do it through social media. Something that you find inspiring may strike someone else as stunningly insensitive. The best way to support others is to actually go to them in person. That’s the way the Father, Son, and Holy Spirit did it: The Second Person of the Most Holy Trinity, God the Son, came to this earth as the man Christ Jesus. He never claimed that He would protect us from horrible things, but He did subject Himself to those same horrible things. He was tortured; He died, and, after His death, He went down to Hell. So when a person is tortured by a rapist, when folks are killed in a car wreck, when someone is trapped in the hell of addiction, Christ Jesus knows what that is like. He is involved.

But when our Lord and Master was going through all those horrible things, He also experienced the frustration of unanswered prayer. Think about Him in the Garden of Gethsemane, asking that the cup of suffering be taken away and receiving no answer. Think about Him on the cross, gasping that line from Psalm 22–”My God, my God, why hast Thou forsaken Me?”–and, again, receiving no answer. So whenever people walk away from prayer feeling like they’ve wasted their time, whenever folks wipe the tears from their eyes and conclude that the Most Holy Trinity just isn’t listening, Christ Jesus knows what that is like. He is involved.

And that means we should be involved in the same way and at the same level: in person, hands-on, for as long as it takes, no matter what might be happening. Because if we want others to be encouraged, if we want others to know that the Father, Son, and Holy Spirit are involved in the minutiae of our lives, then we need to demonstrate that to them–not by sending them cheerful, imaginary conversations with the God of Kittens and Sunsets and Blooming Flowers, but by doing what the Second Person of the Most Holy Trinity has done for all of us: By getting involved, and staying involved, even when horrible things are happening, even when it doesn’t seem like prayers are being answered.