As an Orthodox priest here in Central Texas, I get that question on a fairly regular basis. A lot of congregations in this area only baptize adults or children who are old enough to understand what happens in the ceremony, so folks are just naturally curious when they find out that we baptize infants just a few weeks after they are born.

And when I say baptized, I mean the child is immersed in water three times in the Name of the Father, Son, and Holy Spirit. So we’re not just talking about sprinkling or christening here—we’re talking about good old fashioned going-down-under-the-water baptism.

But what a lot of people want to know is how we can do that to an infant when there’s no way the child is old enough to comprehend what’s going on.

Let’s start with the Bible. In the Holy Gospels, Christ Jesus instructs His apostles not to hinder children who wish to come to Him (see, for example, St Mark 10.13-16). In the Acts of the Apostles, entire households of people are baptized, and those households presumably included children and infants (see, for example, 16.15, and 18.8). But that’s about all the Bible has to say when it comes to the issue of children and baptism. So, while there are passages which support, in a general way, the baptism of children, the biblical bottom line is that Holy Scripture neither commands us to do nor forbids us to do it. 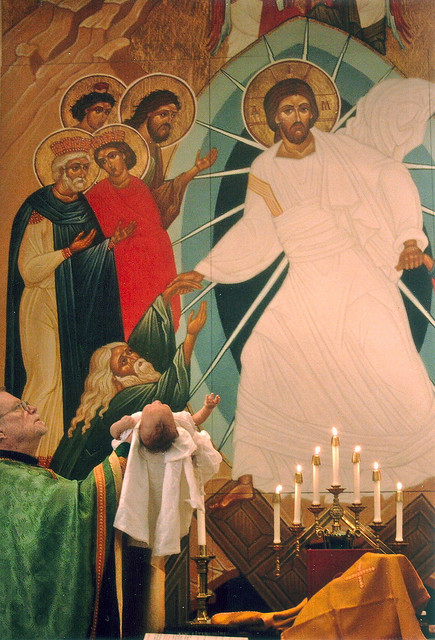 However, the earliest written evidence that we have indicates that Christians have always baptized children and infants. The first writers to mention the subject are two men named Tertullian and Origen; Tertullian lived in the mid second century; Origen lived in the mid third century; both men categorically state that the Church has, from the beginning, baptized children and infants. And the archaeological evidence backs that up. For example, in the Lateran museum at Rome, there is a tombstone which dates to around 150 A.D.; on the stone are written these words: “I, Zosimus, a believer born of believers, lie here having lived 2 years, 1 month, and 25 days.” The inscription is in Greek, and the words ‘believer’ and ‘believers’ were only used of baptized Christians.

So, in the Church, it has always been the practice to baptize children like two year old Zosimus. But 1400 years after little Zosimus departed this life, folks began to approach baptism differently. This was during the Protestant Reformation, and the first Protestants placed a tremendous emphasis on rational thought. In other words, they believed that in order for a person to be baptized, that person had to understand what was going on, and that meant the person who was being baptized had to be old enough to think rationally.

And, five hundred years later, that’s still the position of most Protestants here in Central Texas. Nevertheless, the Church disagrees with that way of thinking. Here’s why: All of us, both Orthodox and Protestants, believe that baptism marks the beginning of a new way of life. All of us teach that those who are baptized must grow into this new life, and we also encourage those who are already members of the Church to assist those who have been baptized and nurture them and hold them accountable.

But there’s absolutely nothing to prevent a child or an infant from participating in that process of spiritual birth and spiritual growth. They simply start at a different point than the adults do. So, just as someone who is baptized as a grown-up will continue to mature in their understanding of what happened to them during that service, a child is going to do the very same thing.

And it’s just not true that an infant has no awareness of what happens to them when they are baptized. Every child knows when it is loved; every child responds to affection and tenderness. An infant may not be able to articulate any of that in a rational, conscious way, but that doesn’t mean that the child has no understanding of life’s most important intimacies. And if all infants, at some level, comprehend and react to human love, surely every child can do the same with the love of the Most Holy Trinity.

And, sure, infants are not going to remember the service in which they were baptized. When they are older, they’ll get to watch the videos and look at the snapshots; they’ll get to see the special clothes they wore for the service; they’ll get to hear their parents and their grandparents and their godparents talk about the event. Nevertheless, the fact that the child has no conscious memory of their baptism is not going to prevent the Father, Son, and Holy Spirit from working in that child’s life as a result of that service.

After all, how many of us who are married actually remember that much of the wedding? And, for that matter, how many of us really understood what we were getting ourselves into as a result of that service? But we grew into that new life; we matured; there were a lot of older, more experienced couples who nurtured us and held us accountable. And our cluelessness did not prevent the grace of the Most Holy Trinity from working in our lives.

In his first letter to the Corinthians, Saint Paul calls the members of that congregation “infants in Christ” (3.1). That’s a metaphor, it’s a word picture, and it’s one that, ultimately, applies to all of us—because, when it comes to our relationship with our Lord and Master, even though we each strive to become ever more mature, there’s not a single one of us who will get to the point where we are all grown-up. So, when we Orthodox baptize infants and children, we are just giving them a head start on that life-long process of spiritual growth.

The best way to support others is to actually go to them in person. That’s the way the…