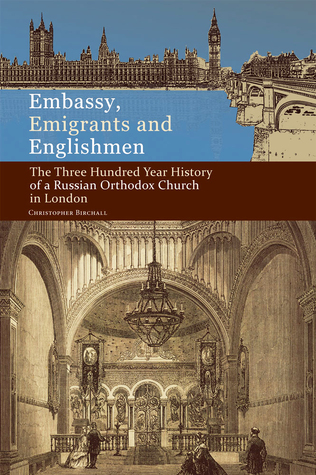 Fr. Christopher’s magnum opus follows the nascent Orthodox community from its founding in 1713 by an Alexandrian bishop to its adoption as the Russian Imperial Embassy Chapel. We gain perspectives on Russian missionary efforts in the 18-19th c., most notably in relation to the Anglican communion but also stretching to continental Europe and the Americas. During the tumultuous 20th c., we see the embassy chapel transformed into a self-sustaining parish that in turn ministers to the struggling Russian emigre community. The study reaches its triumphant conclusion with the construction and dedication of a new cathedral on Harvard Road in Chiswick.

Embassy, Emigrants, and Englishmen has already received scholarly acclaim from several sources: “Christopher Birchall has produced the definitive history of Russian Orthodox presence in London,” writes Dr. Christopher D.L. Johnson, “Not only do details of other Russian (and non-Russian) Orthodox parishes in the United Kingdom find a place in this text, but much of the rich history of the Russian Orthodox Church Abroad is also included.” Dcn. Andrei Psarev, editor of the website ROCORstudies.org, writes, “When I stumbled on photographs of Fr. Mikhail Polsky (author of New Martyrs of Russia) visiting the grave of Karl Marx at Highgate Cemetery in London, and of Aleksandr Solzhenitsyn carrying an icon of resurrection at the paschal service in the ROCOR cathedral at Emperor’s Gate in London, I was utterly entranced…Treat yourself to this feast of ROCOR history!”

The project was initially conceived in 1987 as a short brochure to be distributed a year later at the Millennial celebration of the Baptism of Rus’. When an appeal to parishioners for information garnered two hundred years of archived documents and “an overwhelming volume of material of all kinds”, the idea was born to record the community’s history on a much wider scale. A quarter century later, the completed work is now available in hardcover, paperback, and digital forms.

For the faithful of Holy Dormition Cathedral, the publication of this work is a great blessing. “This fascinating history recounts in well-documented detail the inspirational story of the materially impoverished but spiritually rich community of the London Cathedral parish,” says reader Nicolas Mabin, a long-time member, “At last, its story has been told and future generations will bless the author…for his monumental work.”

The table of contents, author’s introduction, and full index may be found at the book’s dedicated microsite. Also posted are selected photographs from the book and ordering information.