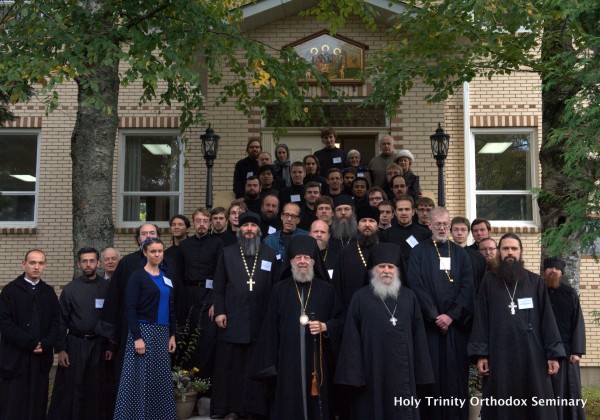 It was dedicated to the 700th anniversary of Venerable St Sergius of Radonezh (1314-1392), one of the most revered Russian saints, the founder and first abbot of Holy Trinity-St Sergius Lavra, who, due to the influence of his labors, was rightly called “the Abbot of all Russia.”

The conference assembled Orthodox pastors and students of theology, who presented papers on various aspects of St Sergius’ legacy. Up to 60 people were in attendance during these two days, including the students of Holy Trinity Seminary, guests from other Orthodox seminaries, and interested members of the community, who came in response to the announcement posted on the Seminary website. In the course of the conference, an exhibit of items related to St Sergius from the collection of Foundation of Russian History Museum at Holy Trinity Seminary was made available in the Seminary Hall through the services of museum curator Michael Perekrestov.

The conference opened at 10 am on Friday with a common prayer and a greeting from the rector of Holy Trinity Seminary, Archimandrite Luke (Murianka), who conveyed the greetings and a blessing from His Eminence Metropolitan Hilarion of Eastern America and New York, First Hierarch of the Russian Church Abroad. Archpriest Gregory Joyce, the newly-appointed dean of Pastoral School of the Diocese of Chicago and Mid-America, offered a few words of greetings in the name of the Pastoral School and its President, His Grace Bishop Peter of Cleveland.

The first speaker was Hieromonk Roman (Modin), Vice Rector of Kazan Theological Seminary. In his paper titled “The Legacy of St Sergius of Radonezh in the Monastic Path of Metropolitan Anthony (Khrapovitsky) during His Ministry at Kazan Theological Academy,” Fr Roman noted the renowned bishops of the Russian Orthodox Church Outside of Russia who were associated with Kazan Theological Academy, especially focusing on the legacy of its one-time rector, Metropolitan Anthony, who later became the founding First Hierarch of ROCOR. Next, seminarian Pablo Lopez (Holy Trinity Orthodox Seminary, 3rd year) reflected on the role of the Holy Scripture in the life of St Sergius. Pablo made the connection between the narrative of St Sergius’ life, as recorded by St Epiphanius the Wise, and biblical events and concepts, emphasizing that the reading of the Scriptures was central for the life of a pious Christian at the time of St Sergius.

During the afternoon session, Novice Angelos Stanway (HTOS, 2nd year) spoke concerning the connection of St Sergius with the hesychast movement in the 14th century. He explained how the movement spread into Russian through the translation of important spiritual texts, and how St Sergius could have been influenced by hesychasm through his association with the followers of the movement among the hierarchy and monastic leaders. In the paper that followed, “Some Greeks Came from Constantinople – Greek Recognition of St Sergius of Radonezh from St Philotheos Kokkinos to the Present,” Subdeacon Ignatius Green (St Vladimir’s Orthodox Theological Seminary, 3rd year MDiv student) discussed the nature of local veneration that is changing in the modern world, allowing for pre-schism Western saints to be venerated in the East and for national saints, such as St Sergius, to be venerated throughout the Orthodox world.

John Martin (HTOS, 5th year) reflected in his paper on the similarities between St Sergius’ life and the life of the sixth-century Western monastic founder, Venerable Benedict of Nursia. He noted a number of thought-provoking parallels and showed how these similarities were rooted in a common monastic tradition. Nicholas Williams (HTOS, Certificate for Pastoral Studies) gave an overview of a social and political influence of St Sergius himself and of the Holy Trinity-St Sergius Lavra throughout the centuries and its role in formation of Russian identity focusing on the role of the Lavra during the Time of Troubles, and on its missionary publication activity in the 19th and early 20th century.

The last talk on Friday was the keynote address presented by Archpriest Pavel Velikanov of the Moscow Theological Academy, “The Experience of ‘Churching’ in the Life of the Orthodox Church Today.” He noted the difficulties in objectively measuring the extent to which one becomes a responsible church member; that is, that one has entered the life of the Church with commitment and understanding. Fr Pavel outlined several stages in a person’s integration into the Church’s life, and identified problems, both external and internal, that await a Christian at every stage. The lively and engaging talk was followed by a Q&A, during which Fr Pavel offered some pertinent advice with regards to the challenges that encounter pastors trying to raise a family.

The first day of the conference concluded with the celebration of a festal ьatins service in honor of the Synaxis of the Venerable Fathers of the Kiev Caves. The festal service was presided by His Grace Bishop Jerome (Shaw), together with concelebrating clergy.

On Saturday morning, following Divine Liturgy and breakfast in the monastery refectory, participants gathered for the second day of the conference, which opened with the presentation by Bishop Jerome, who presented his reminiscences (in both Russian and English) regarding the chapel dedicated to St Sergius of Radonezh in Churaevka village near Southbury, CT. He described his first encounter with the Orthodox Church through this small chapel, built after the drawings of Russian artist Nicholas Roerich for the local artistic emigre community. Bishop Jerome especially noted the people whom he encountered in this chapel, in particular – Reader Dmitry Alexandrov (later Bishop Daniel of Erie – ROCOR, 1930-2010). Further, Michael Woerl, an independent scholar from Dayton, OH, recounted complicated events in the recent ROCOR history accompanying the celebration of the 600th anniversary since the repose of St Sergius at the cathedral named after him in Parma, OH, in 1992.

In the session before lunch, Dr Alfred Kentigern Siewers, professor of English at Bucknell University and a student at Chicago Pastoral School, presented a paper, “St Sergius of Radonezh and the Language of Creation,” which reflected on St Sergius’ relation to nature, as expressed in the saint’s hagiography using the language of the developing scholarly field of bio-semiotics. The final paper of the conference, presented in the afternoon by Alexei Antonov (Kazan Theological Seminary, 3rd year), noted the historical connection between the Academy at Holy Trinity-St Sergius Lavra and Kazan Theological Academy before the Revolution, and focused on the publications activity of the Kazan Academy. The conference concluded with a panel discussion, where the speakers expressed their thoughts on the relevance of St Sergius’ legacy for the ecclesial and monastic life of the Orthodox Church today.

At the conclusion of the panel, the announcement was made that an academic symposium in honor of St Tikhon of Moscow, whose anniversary is celebrated next year, will take place (God willing) at Holy Trinity Seminary in the fall of 2015.

The conference concluded with the celebration of the Hierarchal Vigil on Saturday evening and the Divine Liturgy Sunday morning, both presided by Bishop Jerome.

In his concluding remarks at the end of a conference day on Saturday, Fr Luke pointed out that the conference had more than simply an academic character. Through the study of this saint, who resides in Glory, we become familiar with him and draw closer to him in an unseen way.

Most viewed articles
Growing Cold in Faith after a Few Years in Church: Is This Normal?173
It’s All About the Resurrection – Reflecting on the Season84
Bishop Irenei Addresses a Symposium on “The Mother of God in Our Lives” in Los Angeles83
How to Survive in Modern City. 8 Essential Conditions77
Russian Church to Help Provide Lebanon with Vaccines Against Coronavirus76
Over 20 Thousand People Pray for Discrimination of the Ukrainian Orthodox Church57
Volunteers from St George Greek Orthodox Church in Rose Bay gather to cook for the homeless43
Appeal for Help from the Church of the Mother of God in Austria35
Vandals Attack Serbian Church in Croatia28
We’re Being Robbed1
Most popular authors
Pravmir.com team244
Archpriest Nikolai Markovsky173
Archpriest Gabriel Rochelle84
Fr. Andrei Gavrilenko77
John Voutos43
Archpriest Georgy Kharlov35