Homily on the Feast of the Lord’s Theophany 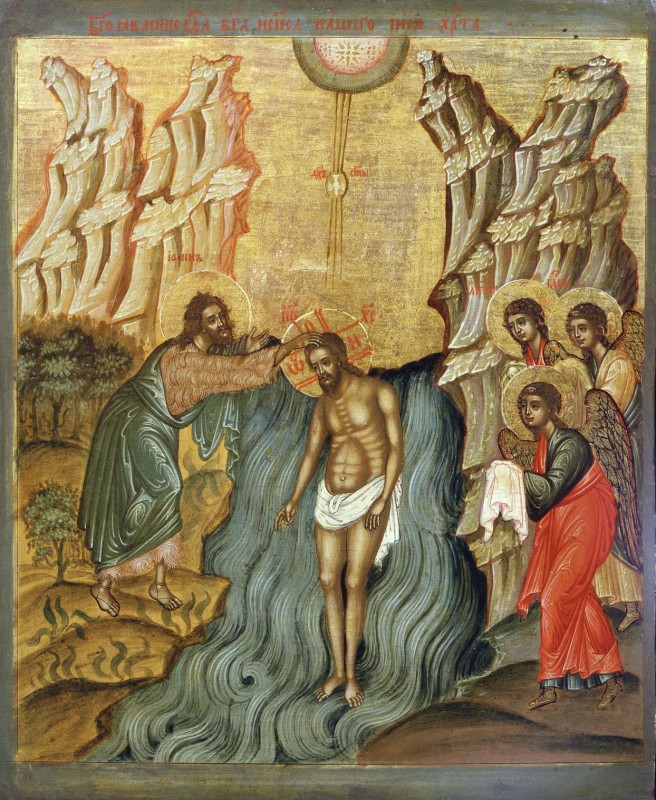 When celebrating the Theophany, we call to remembrance both that God was made known to people as Trinity and that Jesus was revealed to people as Christ. Where was Christ revealed? Where was His work begun? Did He go to a great city to be revealed there in His Glory? Did He ascend a high mountain, with a crowd of many thousands standing below and looking up at Him like a wonder? No! Christ went into the desert, to the River Jordan, where John was baptizing the people. John preached repentance, calling upon sinners to be baptized in the Jordan as a sign of repentance. Christ, Who has no sin, now comes and asks for baptism as a sinner. John was fearful: “You should baptize me!” Jesus replies: “Let it be so now: for this is how we should fulfill all righteousness” [cf. Matthew 3:13-15].

Adam sinned through pride. He wanted to be exalted, to become like God. But Christ came to fulfill the righteousness of God and to expiate Adam’s pride by His humility. Adam wanted to exalt himself before God, but God humbled Himself before man. Christ descended into the waters, receiving baptism from His servant. John, trembling, placed his hand on His Master and God, while Christ humbly bowed His head before him. Christ’s humility unlocked the heavens. The heavens were then opened and the voice of God the Father was heard: “This is My beloved Son, in Whom I am well pleased. This is My Son, Who humbled Himself in order to accomplish My will; this is My true Son Who abases Himself in order to elevate man.” The Holy Spirit descended upon Jesus, confirming the word of the Father. Thus, by His humility, Christ opened the heavens, revealing to people the mystery of the Tri-hypostatic Godhead.

Why did He accomplish this in the waters, and not in some other place? Let us recall how God created the world. When God created the heavens and the earth, the earth was without form and void; the Spirit of God moved over the waters. Then God divided the earth from the waters, but in such a way that water still remained everywhere. Water is essential to every kind of creation. Neither man nor any kind of animal can live without water. There is water (humidity) in the air. Pick up a handful of earth from absolutely anywhere: there will be water there. There is water in stone: it might seem to us that there is none there, but when God so wills, He can draw it out, as occurred in the time of Moses. The earth is the Lord’s, and the fullness thereof, the world, and all that dwell therein. He hath founded it upon the seas, and upon the rivers hath He prepared it, as the Psalmist says (Psalm 23:1-2). By the word of God the heavens were of old, and the earth standing out of the water and in the water, the Apostle Peter writes, Whereby the world that then was, being overflowed with water, perished (2 Peter 3:5-6).

When man sinned, he incurred the wrath of God not only upon himself, but upon all of nature. Man is the crown of God’s creation; he was made nature’s king. But when this king became the enemy of another King, his entire kingdom became an enemy kingdom. The penalty was incurred not only by man, but by all of creation. We know that the whole creation groaneth and travaileth in pain together until now (Romans 8:22). But the creature was made subject to vanity, not willingly, but by reason of him who hath subjected the same (Romans 8:20). Therefore, the forgiveness of the offender also frees creation from the bondage of corruption. This corruptible nature will be destroyed, being transformed into new heavens and a new earth, wherein dwelleth righteousness (2 Peter 3:13). It was in order to make this transformation possible, and to prepare nature for the incorruption that will occur after the dread day, that Christ came to the waters of Jordan.

By His immersion in the Jordan, Christ sanctified not only the waters of the Jordan, but the whole nature of the waters, as the Church cries out in its hymns: “Christ hath appeared in the Jordan to sanctify the waters” (troparion of the forefeast); “Today the nature of the waters is sanctified” (troparion at the Blessing of the Waters). Since there is water everywhere, by sanctifying the waters, Christ thereby sanctified all of creation and the entire universe. Christ prepared nature that it, too, might experience the beneficial consequences of the sacrifice that He came to offer. But this was not yet everything. He gave the waters the power to cleanse human sin. The baptism of John was only a sign of repentance. Christian Baptism is a new birth and the forgiveness of all sins. God punished the sin of the first world with water, destroying it in a flood of waters. Now God saves people with water in the Mystery of Baptism.

Thus, as we sing in the hymns of the Church, Christ crushed the head of the serpent in the waters of the Jordan, the head of that same serpent that deceived Adam and Eve but was defeated by the humility of Jesus. He made known to people that God is Trinity and He sanctified the waters, preparing all of creation, along with the waters, to receive the word of forgiveness and to prepare it for incorruption. Then, having withstood another battle with the devil in the wilderness, Christ went to prepare people for the kingdom to come. He began His preaching with these words: Repent: for the kingdom of heaven is at hand (Matthew 4:17); or, as another Gospel puts it: The time is fulfilled, and the kingdom of God is at hand: repent ye, and believe the gospel (Mark 1:15).

Until that time, John the Baptist had been preaching repentance, preparing the way for the Lord. Now the Lord Himself cries out to people: “Repent!” This voice is not addressed only to the people who lived in the time of Christ; rather, by these words, Christ addressed all people of every time and age. We, too, have heard these words in the Gospel. So long as the festal hymns of the Theophany have not gone silent, they will remind us that the time of repentance is drawing near.

Let us be attentive! For these are the words not of a prophet or an angel, but of the Lord Himself. Let us repent and, in the approaching fast, let us strive to conquer our passions and to receive remission of sins, that in the age to come we might enter the imperishable kingdom prepared by the Lord. Amen.

Patriarch Kirill of Moscow and All Russia, Sermon on the Feast of the Lord’s Theophany

Fr. Sergei Sveshnikov, On the Blessing of Homes on Theophany