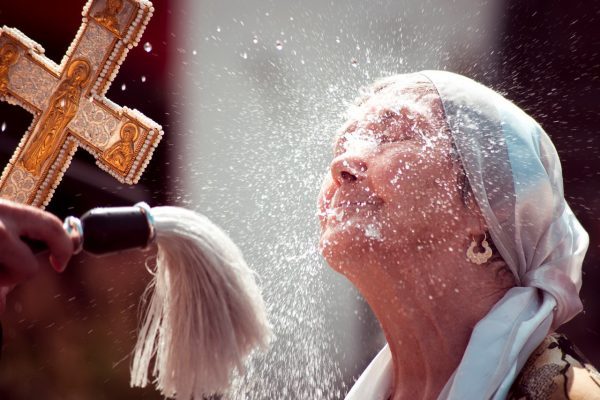 The focus of this great feast is the Lord’s baptism in the river Jordan by St. John the Forerunner.  Another name for the feast is Theophany, for it is shown—it is revealed at Jesus Christ’s baptism—that He is the Son of God.  Indeed, the Holy Trinity is revealed at His baptism, for the Father says, “This is my beloved Son in whom I am well pleased,” and the Holy Spirit descends upon Him in the form of a dove.

The meaning of the Feast of Christmas is fulfilled at Theophany, for now it is made clear that the One born in Bethlehem is truly God, come to restore our fallen nature and to renew the entire creation by uniting humanity with divinity in Himself.  And even as the Son of God entered our world at His birth, He now enters the flowing water of a river in order to make it holy, in order to bring His blessing and fulfillment upon the world that He created.  For the entire creation was subjected to futility because of the rebellion of our first parents.  As St. Paul wrote to the Romans, “the whole creation groans and labors with birth pangs together until now” for it also “will be delivered from the bondage of corruption into the glorious liberty of the children of God.”

The good news of the gospel is that the Creator has become part of the creation in order to make it a new heaven and a new earth.   We see at Theophany that nothing is intrinsically profane or cut off from the blessing and holiness of God.  All things, physical and spiritual, visible and invisible, are called to participate in the divine glory that our Lord has brought to the world, to become part of the new heaven and earth of God’s kingdom.   Christ’s baptism demonstrates that we, too, are saved along with the rest of the creation, for it is through the water that we share in His life.  “As many of you as have been baptized into Christ, have put on Christ.”  In baptism, we receive the garment of light that Adam and Eve lost when they distorted themselves and the entire creation with sin and death.  The incarnate Son of God sanctified our flesh and blood at His birth, and at His baptism He sanctifies the water through which our calling as those created in the divine image and likeness is fulfilled. 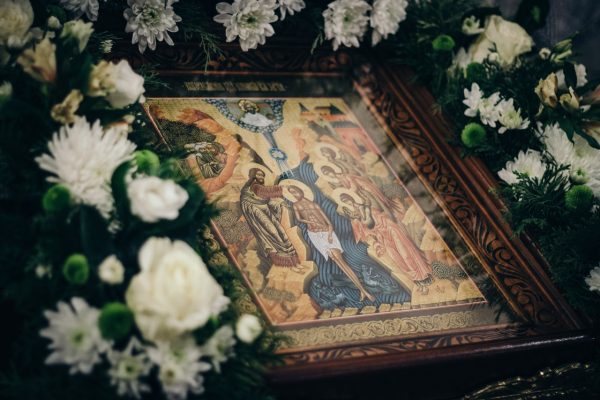 When we bless water at the conclusion of liturgy today, we will participate in our Lord’s healing of all reality, for holy water is a sign that every dimension of creation is to be sanctified, to become holy by the fulfillment of God’s original purposes for it.  Even though we pollute it and it is sometimes our enemy in storms and floods in the world as know it, God created water to sustain us and to bring life to the world.  Christ has restored water to its intended purpose by making it holy through His baptism, which is a sign of His intention for every dimension of the universe that He spoke into existence.

When you have your Epiphany house blessing this year, I will sprinkle holy water in every room of your house, which is a sign of God’s blessing upon even the small details of our daily lives.  It is also a calling to sanctify every aspect of our life and to recognize that every dimension of who we are as human beings is to be baptized into Christ, dying to sin and rising with Him in holiness. True Christianity is not escape from the world or simply a matter of emotion or morality.  No, we are called to become like God, to participate in His infinite holiness to the depths of our souls in every thought, word, and deed.

So this Theophany, we should become like the water that we will bless later in the service.  That means responding to Jesus Christ’s great blessing of the world such that we share in His life and become more fully who He created us to be in the first place in the image and likeness of God.  No, none of this is magic. If we do not cooperate with our Lord’s mercy by repentance and growth in holiness, holy water will do us no good.  But if in humility and faith we thirst for the fulfillment of our daily lives in Christ, then drinking and being sprinkled with holy water will nourish us spiritually just like water revives a shriveled plant on a hot, dry day.

Theophany makes it possible for us to quench our thirst for holiness, for the divine life for which for which we were made.  This is the joyful, blessed life of the Holy Trinity that Jesus Christ has brought to the world.  This Epiphany, let us all stop dying of thirst for God and instead be filled to overflowing by the mercy, presence, and power of the Lord.  And then, like well watered and nourished plants, we will flourish and bear good fruit for the Kingdom of God. 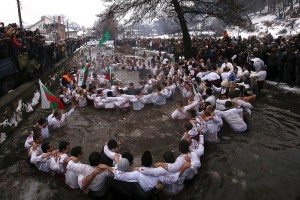