Having stated that one cannot grow in the Christian faith without knowing that the locus of eternal life is the human heart, and that the commandments are necessary in order to cleanse the senses so that the heart might be purified and revitalized, we now move on to the next step intrinsic to the spiritual life, which is the illumination of the mind.
Archpriest Paul Jannakos | 09 June 2010 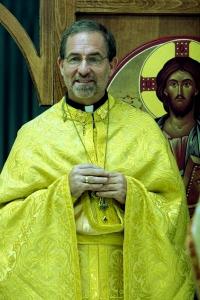 Having stated that one cannot grow in the Christian faith without knowing that the locus of eternal life is the human heart, and that the commandments are necessary in order to cleanse the senses so that the heart might be purified and revitalized, we now move on to the next step intrinsic to the spiritual life, which is the illumination of the mind. Today, quite unfortunately, we view the mind in a very limited sense, as being an autonomous “faculty,” i.e., as the biological expression of the human intellect. This is the mind employed for reasoning, deduction and analysis, and according to the European enlightenment thinkers, it is this biological mind – atop of the neck – that makes us uniquely human. As Rene Descartes said, “I think, therefore I am.”

But from the Orthodox perspective, the human mind is not simply the cerebral expression of our biological nature. Instead, it was originally meant to be linked to the heart as its spiritual “eye,” through which we as human beings gaze upon all things. This eye is the “lamp of the body” of which Christ speaks as being either filled with darkness or light. If it is filled with darkness, it is only because the fallen egotistic self has come to see itself at the center of all things. Or to say this more accurately, it is because the fallen self has become the lens through which all things are perceived and judged. So, that which benefits the egotistic self is judged as being good while that which detriments the egotistic self is judged as being evil.

Yet when the mind is cleansed from the passions, it becomes enlightened by the Holy Spirit and becomes transparent to the light. The darkness is dispersed by the light and the mind is immersed in grace and is made able to see and understand all things in their relationship to God. In paradise, Adam and Eve saw the world and all things in it in harmony with God and with themselves. The uncreated light, which shone from the beginning of creation (“Let there be light”), they perceived as being present in all things, and giving life to all things. After the fall however, the human mind became darkened and was no longer capable of seeing how the entire cosmos was, and still is, God’s first “burning bush.” Human experience became narrowed into a single carnal reality, and the earth became desolate as a result. Even so, through the practice of unceasing prayer, the darkness is dispersed by the presence of grace. As St. Paul says, “For the pure, all things are pure.” Because of this, prayer is foundational to spiritual growth. Prayer is the means by which one transcends the flesh in order to become a “child of the light.”

From a practical standpoint, the illumination of the mind allows us as human beings to begin the process of discernment, which is the gift of knowing the difference between good and evil thoughts. For those who live in the flesh, there is no understanding of how the thoughts of the mind affect the soul. There is no critiquing of whether or not such and such a thought will lead us to heaven or lead us to hell. For example, the more one lends himself to the passionate thoughts of anger or greed or lust, the more entrenched he becomes to the corresponding passionate behaviors. Yet, through the practice of repentance, it becomes possible to discern how these evil thoughts are what lie at the heart of the problem. Simply put, this means knowing that a single thought has the power to move the soul in either a positive or a negative direction. Negative thoughts are the temptations that come from the demons. They are the seeds that the devil has cast into the field so that they might grow up and spoil the harvest. Yet, by maturing in the faith it is possible to first know that these thoughts are harmful to body and soul and second to know that we can renounce them through the practice of prayer. We need not be a slave to our bad thoughts.

The Discipline of Faith

The Holy Sacraments: “Picture and Pattern” of Spiritual Growth