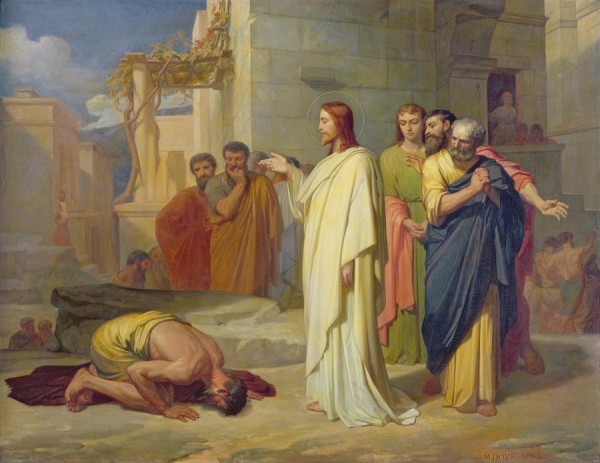 “Go and show yourselves to the priests. And as they went, they were cleansed.”

If the gospels are clear about one thing, it is about the need for obedience. The 10 Lepers were cleansed, yes. Only one of them came back to give thanks, yes. But, this entire narrative is predicated upon the fact that the 10 were cleansed because they were obedient to the call of Christ. And we are going to focus on this aspect of the story this morning because the virtue of obedience, which is one of the great hallmarks of the Christian life, is a virtue which is misunderstood by the majority of us ordinary Americans.

We Americans, after all, love our freedom. We love our independence. We love the fact that, in contrast to many other cultures, we are not bound to the kinds of social restraints that would prevent us living autonomously, that is, from being able to do what we want, when we want, and how we want. We love the fact that the secular society in which we live has exalted self-will to the status of being the highest value and good. Isn’t this what makes the American way of life what it is? The opportunity to determine for ourselves the kind of persons we want to become and the kind of good life we hope to attain? So, can any of us here today, myself included, really, truly, honestly, imagine ourselves living life any other way? Yet this is where we get into trouble with the notion of obedience, because obedience appears, quite blatantly, to run upstream from the downstream of ideals and principles that define us as an American people.

This leads us to the virtue of obedience as characterized by the gospels, and which we saw employed in the behavior of the 10 lepers. Here we learn that obedience is part and parcel to the mystery of salvation. But what is really interesting is how different our notion of obedience is in the Church from that of the obedience we have just described in the civil and social sense. And this is for one reason: because nowhere in the gospels, and within the life of the Church, is any one ever compelled to be obedient. Nowhere do we ever find the words, “you must do this and you must do that.” Think about it, just for a moment. This free country in which we live compels us to follow its laws; failing to do so leads to all kinds of unpleasant consequences, to fines, and jails, and probation, and the like. Break these rules and your freedom becomes progressively diminished. But within the Church, obedience has a much softer feel, only because no one is constrained to do anything they have not freely accepted to do. Jesus wants us to surrender our fallen, selfish, sinful wills to Him. But He does so by invitation and not by force. And He does so because love and obedience are related to each other from the beginning. Here we arrive at the crux of the matter, because as the Son of God Himself, Christ loves His Father by doing His Father’s will. Jesus is obedient to His Father’s bidding, and He does so because His love is perfect and unending. As the letter to the Hebrews states, “[And] although he was a Son, he learned obedience through what he suffered; and being made perfect he became the source of eternal salvation to all who obey him, being designated by God a high priest after the order of Melchiz’edek.” Unlike the old Adam Who failed in his love on account of his disobedience, the New Adam is perfectly obedient to His Father and is, for this reason, vindicated glorified at His Father’s right hand.

Simply put, being obedient to Christ means giving up our fallen, selfish, sinful wills in favor of God’s will whose will for us is always for good. At first, this is an incredibly painful thing to do, because it means doing the things we don’t feel like doing. It means surrendering ourselves to our daily prayer even though we may not be in the mood for prayer. It means participating faithfully in the liturgical life of the Church even though we may not feel like going to Church. It means confessing our sins in the sacrament of confession even though everything inside of us is screaming that we can do it later, at a more convenient time. It means giving ourselves up to the Christmas fast even though we are surrounded by all of the holiday goodies that tempt us to forsake the virtue of fasting whose beginning is obedience to the discipline of the fast. Obedience is really, when it comes down to it, the way we cut off our selfish, willful compulsions by giving ourselves up to the little things that all add up to a life of faith. And here I will add my own suggestion, which is that it is ok for us to acknowledge the fact that quite often we might not feel like doing what we know deep down is God’s will for us to do, be it liturgizing, confessing, fasting or praying. For by acknowledging it we are simply confessing to ourselves and to the Lord that this is how we are at this moment. And we do this because we can then counter these feelings and thoughts and moods with the words “so what?” “Yes, I’m not in the mood. But so what, I’ll do it anyway. And I’ll do it because I know and believe in my deepest heart of hearts that by doing it God will bring about something good in the end.” “Go and show yourselves to the priests, and as they went, they were cleansed.”

This is what obedience looks like within the life of the Church. We cut off our own self-will in favor of God’s will because we know that apart from this, we cannot truly love God. Amen.