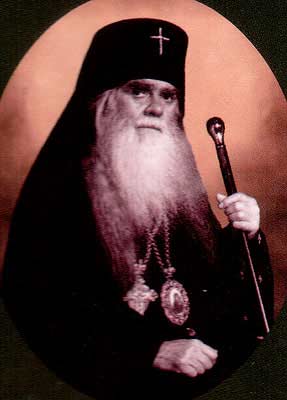 Wednesday, April 13, will mark the 40th anniversary of the repose of Archbishop Averky (Taushev) of Syracuse & Holy Trinity, a distinguished vicar of the Eastern American Diocese. This year, the anniversary of his repose will be commemorated at the Diocesan Center. Metropolitan Hilarion of Eastern America & New York, First Hierarch of the Russian Church Abroad, will serve the Liturgy of the Presanctified Gifts, co-served by Bishop Nicholas of Manhattan.

Upon completion of the Liturgy, a Litiya for the departed will be served, after which Protopresbyter Valery Lukianov will deliver a talk on Archbishop Averky’s life and legacy. Clergy and faithful desiring to honor Vladyka’s memory are invited.

Hours begin at 8:30 AM, greeting of the Metropolitan at 9:30 AM. Clergy will serve in black.

A Short Biography of Archbishop Averky.

Archbishop Averky (in the world Alexander Pavlovich Taushev) was born on October 19, 1906 in Kazan’, Russia, to an aristocratic family. After 1920, the Taushevs found themselves exiled, and the future hierarch’s youth was spent in Bulgaria. In 1926, he graduated from the Russian school, and in 1930 received a degree in Theology from the University of Sofia. He was a student of Archbishop Seraphim (Sobolev – glorified on February 3, 2016).

He served in Carpathian Rus’, Hungary, Yugoslavia, and Germany, and taught Law of God in the Displaced Persons camps.

In 1951, at the invitation of Archbishop Vitaly (Maximenko), Archimandrite Averky moved to the U.S., where he became a professor at Holy Trinity Orthodox Seminary in Jordanville, NY. In 1952, he became the permanent rector of the seminary, and the editor-in-chief of “Pravoslavnaya Rus’” (“Orthodox Russia”) magazine.

He was an academic and theologian, author of renowned exegeses on the New Testament.

On August 17, 1961, he was elevated to Archbishop of Syracuse & Holy Trinity. From 1964 on, he served as a permanent member of the Synod of Bishops of the Russian Church Abroad.

He reposed on April 13, 1976, and is buried in a crypt beneath Holy Trinity Cathedral at Holy Trinity Monastery in Jordanville.