I feel like a bridge between Russia and Vatican – Natalia Tsarkova

The Moscow artist Natalia Tsarkova settled down in Rome a couple of steps from the Vatican. This nice woman is not just another compatriot of ours who has chosen the Eternal City for her residence; she has received the honorary title of the official portrait artist of Pope Benedict XVI.

As a graduate of the All-Russian Academy of Fine Arts, she came to Italy to perfect her craftsmanship and quickly became a portrait artist of international standing, making portraits on orders coming from imperial houses and aristocrats, famous statesmen and cardinals. At some point the Vatican noticed Natalia.

In her interview to the Voice of Russia, Natalia tells about her meeting with Pope John Paul the Second. 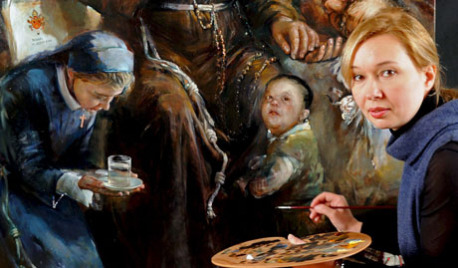 It’s no secret that many colleagues of yours paint portraits of the Pope, but it was only you who became the official portrait artist of the Vatican. So many years have passed, how do you explain this choice made by the Holy See?

I believe it’s a combination of things. I am sure Providence has something to do with that. The thing is, I came to Italy with a show for only three months and Rome did everything not to let me go back. I started working with the nobility. At that time the Pope did not have an official portrait despite the fact that he was at the Holy See for 22 years already. It so happened that I received an order and I made the portrait, which exceeded all expectations and was confirmed as the official portrait. I was brought up on Rafael, Michelangelo, and Bernini; from my childhood years their masterpieces served me as unattainable and inspiring examples. They became world famous specifically by their work for the Pope. It is a great honor to continue the tradition of those great masters, but it is also a great responsibility. For example, a few days ago in Rome and then later in Washington an exhibition was organized, where the portraits of the Pontific over the past 500 years were presented: from the portrait of Pope Julius II made by Rafael to the works of Velazquez, Decatron, Bernini, as well as two portraits of mine – of John Paul I and John Paul II. In reality, I was the only living artist presented at the exhibition. I feel honored that those two portraits of mine were selected among the best five portraits of that exhibition.

Has the Vatican ever voiced the concern that your faith is Russian Orthodox?

Absolutely not. The most important thing is that we are united in our faith in Christ. And in reality there are fewer differences between us than one can think. I feel very needed. I am greatly appreciated here and my works are well respected. In some respect, I feel like a bridge that represents Russia. And this puts additional responsibility on me.

How did the work on the portrait of John Paul II go? I suspect that the Pope is an unusual model that stands out among others.

I got scared when I got an official proposal to make the portrait of John Paul II. Because back then that world was still new for me. I began to study the works of John Paul II, started making sketches during the visits in order to get to know that person. I also studied his life. As a result, I understood how to paint the Pope. He is standing up sort of bending under the load of human suffering, leaning on his crosier and looking into the distance with love and hope. There is a small secret there. When John Paul II saw the portrait he was even startled with surprise, because his crosier reflected the image of the Virgin with the baby. In reality, it is the “third secret of Fatima”. At the beginning of the XIX century the Virgin appeared and opened three secrets to children. Nobody ever revealed the secrets; they were kept very carefully. “The third secret of Fatima” says that the person in white, i.e. the Pope, is to fall down. John Paul II saw in this a prediction of the assassination that had happened in the past.

Natalia made three oil portraits for the Pope. The first one was done for his 80th anniversary in 2000. It is now exhibited in the Vatican museums along with her portraits of Pope John Paul I. The second portrait was ordered by the John Paul II Cultural Center in Washington. Cardinal Stanislaw Dziwvisz presented the third one to the Roman Basilica of S. Maria del Popolo, where the Cardinal served and where the masterpieces of Caravaggio, Bramante, Pinturicchio, Sebastiano del Piombo, Gianlorenzo Bernini, Rafael and Annibale Carracci are exhibited.

What was the Pontific’s reaction to the first result of your “joint” work?

I was honored to present that portrait during a private audience with the Pope. John Paul II liked the portrait a lot. He said to me in Russian: «Are you a Russian? Long live the Russian art! Go on like this!» And I did go on.

You also entered the history by becoming the first woman who ventured to paint her own version of the Last Supper. Please tell us why in Italy it was called «The Last Supper of the third millennium»?

«Of the third millennium» was mentioned because the composition of the painting is unusual. In other words, it is as if I entered from the other side of the Lord’s Supper and Jesus turns towards us and looks at us. I think that in our millennium Jesus can no longer look into the sky, as he did in the previous paintings, or at the bread, as in Leonardo’s Lord’s Supper, but he has to look at each one of us, as if saying: “What are you doing, people, stop it!” That is why that painting got the honor to be exhibited next to the Last Supper by Leonardo da Vinci in Milan. That event was linked to September 11. The painting embodies the symbol of peace, love and meditation. Its destiny is special; I would say it has a mission. It was exhibited in Rome during Easter, and then it was moved to Milan, now it is about to travel to New York, then to Moscow, Russia. That was my dream. The idea is the love for Christ unites people and continents.
Source: Voice of Russia
Tweet
Donate
Share
Since you are here…