“Apologize and Then Keep Quiet Forever” 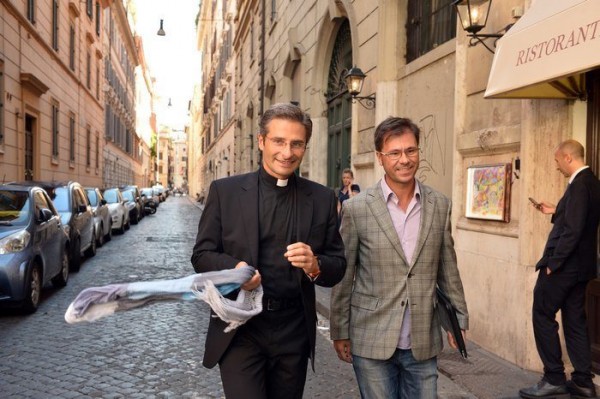 Recently the news has been full of the story of a Roman Catholic monsignor, Krzysztof Charamsa of Poland, the Adjunct Secretary of the Congregation for the Doctrine of the Faith of the Roman Catholic Church (shown in the photo with his boyfriend).  The Reverend Charamsa was a former Vatican official, and he was stripped of his post recently after he publicly acknowledged that he was gay and also in a gay relationship with another man.  He has written the Pope a long and heart-felt letter (some might describe it more as “histrionic” than “heart-felt”), denouncing the Roman Catholic Church as “violent”, “fanatical”, “incapable of dialogue with humanity”, “inhuman, insensitive, unjust and violent”, “Pharisaical and hypocritical, locked into its cold and inhuman doctrine without mercy or charity, a homophobic Church that knows only how to hate”.  He also declared that the Church was also a “particularly hateful Church, which is presently led by pastors without hearts or brains”.  In his letter he also denounced the Church’s official pronouncements on the issue of homosexuality as “violent and offensive”, “obscene”, and its clergy as “violently homophobic”.  There is more, but you get the idea.  His favourite word is “violent”, used eight times. (The full text can be read here.)  In the penultimate paragraph (before he ends by saying of course that he will pray for the Pope and will do everything he can “to help homosexual people wake the Catholic Church from its inhuman sleep, which by now has reached bestial limits of intolerability”), he says that the Church must “apologize and then keep quiet forever”.  Presumably such imposed silence also means that the Church must forget about its previously noble “dialogue with humanity”.

Apart from the fury, hatred, and the violence of the language, it is an extraordinary letter.  Some have suggested that the fury and violence is evidence that the man is in pain. He is certainly upset about being stripped of his job at the Vatican because he has a gay boyfriend.  But it is not so much a personal letter as a long and angry slamming of the office door on the way out after being given the papal pink slip.  Despite his characterization of the Roman Catholic Church as “incapable of dialogue”, it seems clear that he himself is not in the mood for much dialogue.  He asks from his church not dialogue, but simple capitulation to his own gay agenda and ideology—that is why his final demand is that the Church apologize and then shut up forever.  I understand the nature of such demands.  When it occurs in the school-yard, it is called “bullying”—though in this case the muscle is provided by not by violent shoving or hitting the other party with your lunch-box, but by violent language and self-righteous rhetoric.  And, like I did in the school-yard when faced with such demands as a child, I decline to get into it with him.  I would rather just walk away and eat my lunch safely and quietly somewhere else.

However, if I did choose to reply, I might say the following, for after all, Monsignor Charamsa has not simply written a personal letter, but issued a kind of public manifesto, and it is to the public manifesto that one can reply.  Manifestos invite reply; that is the point of a manifesto.

In my reply, I would first of all say that the traditional Christian Church, be it Roman Catholic or Orthodox, should not heed impassioned demands that it shut up and say nothing when its central teachings are trampled, denied, and distorted.  The Church has a divine duty to proclaim the truth to whoever wants to listen, and especially to its own members.  St. Paul did not “keep quiet forever” about the false Christology proclaimed by the early Gnostics, or about the supposed necessity of circumcision demanded by the early Judaizers.  It is true that both the Gnostics and the Judaizers would have been happier if he did, but such silence would have been spiritually criminal and a betrayal of Christ.  Of course the World will not like it when opposed by the Church. No one likes being opposed and contradicted.  It can be very irritating and infuriating.  But being an adult involves being committed to non-violent dialogue when such disagreements occur, not screaming at the other party because they dare to contradict.  It is easy to have a tantrum and to scream “shut up!”.  It is harder to be an adult and go on debating calmly. No doubt the child having the tantrum is “in pain”.  But such pain is no excuse for the tantrum.

Secondly, merely pronouncing that something is sinful is not of itself an act of violence, hatred, marginalization, stigmatization, or any of the other things of which the Reverend Charamsa accuses us.  Saying that abortion is morally sinful, though irritating to abortionists and those using their services, does not “marginalize” those who abort.  Rather it is simply declaring what forms of behaviour are compatible with a profession of the Christian Faith and which are not, and acting accordingly.  If one chooses to abort one’s child, one cannot then claim that the Church somehow marginalizes you and tramples on you because it says you should not have done it and calls you to repentance.  The Monsignor assumes with proving that homosexual activity is okay, and then becomes furious when the Church says that it is not.  But he is the one who chose to engage in activities which placed him outside the bounds of the Church.  If the teaching of Christ and His apostles about marriage and sexuality is true, what else can the Church do?

Finally we note the inherent absurdity of Monsignor’s position.  The Church which he voluntarily joined, accepted ordination and promotion and money from, and remained in for all his forty-three years is one which has always declared that 1. homosexual acts are sinful, and 2. its clergy must remain celibate.  This cannot have been a surprise to Charamsa.  It is not as if the Catholic Church up until yesterday said that homosexual acts were just fine and that its clergy could be sexually active if they wanted to.  Why the indignation now?  That is like joining a group of committed vegetarians and then fulminating against them because they expel you from the group because you keep eating steak and saying that vegetarianism is too narrow.  One may eat all the steak one likes, but then one cannot expect the group promoting vegetarianism to welcome you in the group as one of its leaders.  It is difficult not to conclude that the real offense in the Monsignor’s eyes was not so much the position of the Catholic Church on homosexuality as the fact that their fired him for having a boyfriend.  One may continue to debate the issue of homosexuality and the teaching of the Church if one likes, but let us at least be consistent.  The issue here about Charamsa is not just that of his homosexuality, but of his basic integrity.