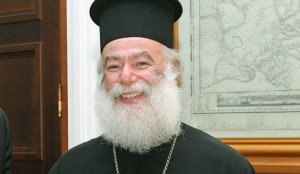 Festivities dedicated to the 1025th anniversary of Christianity in Russia are over in Russia, Ukraine and Belarus. Eight patriarchs came to mark this important date with hierarchs of the Russian Orthodox Church. Patriarch Feodor II of Alexandria and All Africa was among the honorable guests. He shared his impressions with The Voice of Russia in an exclusive interview.

Due to the tight schedule of the celebrations the patriarch was interviewed on the train in which he travelled across the historical territory of Ancient Russia from Moscow to Kiev and then to Minsk in the company of other patriarchs and representatives of world Orthodox Christianity. “I am very much impressed with this journey,” the patriarch said.

“In 1988 I attended the celebration of the 1000th anniversary of Christianity in Russia. At that time I was the archimandrite of the mission of the Church of Alexandria in Odessa which belionged to the Moscow Patriarchate then.Our Patriarch Parfeny could not come, so I represented him. I remember Patriarch Pimen who was in a wheelchair. The service was celebrated by Patriarch Ignaty of Antioch. I remember that the sky was overcast on that day. I had a feeling that the weather was meant to remind people of the sufferings that Russian people endured on the way to this happy event. And when we went to Kiev we saw the heaviest rain in my memory. It is God’s will today that I have arrived to celebrate the 1025th anniversary of Christianity in Russia, this time as the Patriarch of Alexandria. I thank God and my dear brother Patriarch Kirill for this blessing. I hope that we will also celebrate the 1050th anniversary of Christianity in Russia together.”

From time to time Patriarch Feodor speaks in Russian which is not his first language but he likes it very much. He can talk about Russia and Russian people for hours. No wonder because he was a representative of the Alexandria Patriarchate in Odessa in the 1980s. In the USSR people did not separate Russians from Ukrainians, it was one country, Russia, and I gave my heart to it, the patriarch says.

“When I studied theology at Thessaloniki University I read a book about a Russian saint named Seraphim of Sarov. After that I prayed to that saint every night for seven years so that I could have an opportunity to know the Russian land. My prayer was answered and I lived in Russia for 10 years. I learned Russian but I could not imagine that the whole world would speak Russian and it would gain world significance. I am grateful to Russia and its people because I learned many things from them that help me to do my patriarchal duties.”

“I am glad that among the old patriarchates ours is the one that has always been on very good terms with Russia. I am grateful to Patriarch Kirill for allowing several young African men to be educated in Russia. When I meet presidents or prime ministers of African countries I am always pleased that I can speak Russian to them because many of them were educated in Russia.”

Patriarch Feodor’s current trip to Russia is taking place at a very difficult time for the African continent and the Middle East region. The growing influence of radical Islam is forcing Orthodox Christians to leave the lands where Christianity originated in the past.

“In Egypt we, representatives of the Alexandria Patriarchate, are the smallest religious community of the country. The Coptic Church has much more influence, it has about 15mln parishioners. Now my heart is bleeding again because disorders started again in Egypt a few days ago. Fanatical conservative Muslims attack those who stand for a modern life style. When I talk to people I understand that the Muslim Brotherhood cannot and will not do anything good for anyone. They do not act for the common good but protect their own interests. At the same time I must say that no one has ever hurt anyone at the patriarchate or myself. We are treated with respect. Everybody calls us Greeks and we never feel any aggression on the part of the Muslims. In the evenings I often go out for a walk with a rosary in my hands and ordinary Muslims often invite me to their houses.

Patriarch Feodor II says that after his return to Egypt he intends to meet with the Muslim sheikh and the head of the Coptic Church. The patriarch is convinced that spiritual leaders together will find the way to prevent a bloodshed in the country.