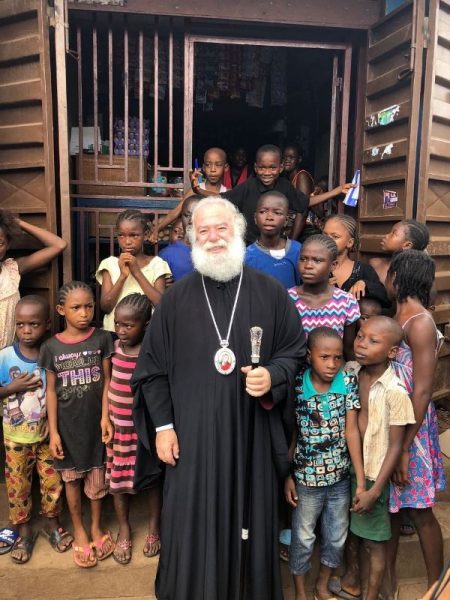 On the afternoon of Saturday 10th November 2018, His Beatitude Theodoros II, Pope and Patriarch of Alexandria and All Africa, laid the foundation stone for the building of an Orthodox Primary School in the most impoverished neighbourhood of the planet in the slum areas of Crew Bay in the heart of the capital of Sierra Leone, where the Patriarch is on a five-day visit. Twenty-seven thousand people live in the slums of Crew Bay, 7 thousand of which are children, who truly live under the most impoverished conditions existing on the planet and many of these children die before they reach the age of five, due to their lack of vaccinations. For the education of these children until today there was a rudimentary school of two classes, with non-existent sanitary facilities. In the torrential rains of last winter, the camp lost 300 people, and more than 3,000 were forced to leave their homes.

The foundation stone was laid in the presence of the mayor of the city, the Municipal Council and the members of the Community of slum residents. With deep emotion, His Beatitude thanked the pupils of the 1ST High School in Halandri, who will be making a decisive contribution to the building of the new school, which will improve the quality of the education of the children from the slum area. The representative of the residents of Crew Bay, emotionally thanked the Orthodox Church for the God-loved work which they have undertaken to bring to fruition in their slump camp, saying he is one of the children who grew up there and who was deprived basic education and that for the first time today he will sleep peacefully and joyfully.

Earlier the Patriarch was warmly welcomed by the newly-elected Mayor Mrs. Yvonne Aki Sawyer at the Municipality in the city, which during the tough years of slavery, the slave traffickers used it as a place of keeping the slaves before they were loaded onto the ships bound for Brazil. The capital of Sierra Leone is the city which received the first freed slaves who returned to Africa and that is the reason why it was named Freetown. The Mayoress, deeply moved by the presence of the Patriarch in her city, offered him the “key to the city” and thanked him for the interest shown by the Orthodox Church in supporting the suffering citizens of Freetown, particularly the little children. In his reply, the Patriarch thanked the Mayoress for the welcome and assured her that the Patriarchate will always be present in all her efforts to live the quality of life of the residents, not only of the capital but of the entire country. 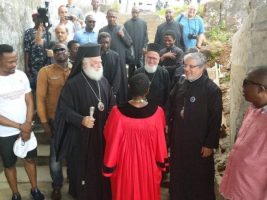