Source: The Christian Post
Sami K. Martin | 27 October 2014
The daughter of Asia Bibi, a Christian woman being held on death row in Pakistan, has spoken out about the alleged torture her mother experienced at the hands of alleged Islamic zealots. 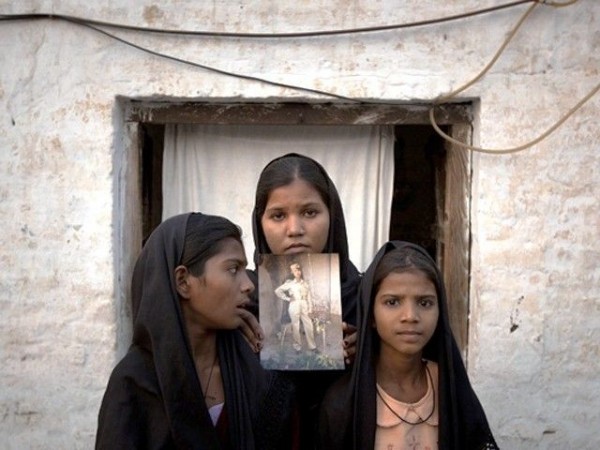 The daughters of Asia Bibi with an image of their mother, standing outside their residence in Sheikhupura on November 13, 2010.

“My friends told me that people were torturing my mother at the fields where she used to work,” Esham Masih, who was nine years old at the time, told Mail Online. “I rushed to the spot and found that she was being abused and tortured by men.”

The beating allegedly began after Bibi encountered some Muslim workers in the field where they all worked. The women accused her of being unclean because of her Christian faith and later said that she made disparaging remarks against the prophet Mohammed. After the beating, Bibi was taken into custody and sentenced to be hanged. Her case has drawn international attention from Christian and women’s rights organizations.

“I still dream of the day she was tortured and arrested,” Masih added. “I could not sleep properly. They had torn her clothes. The angry men came back and started torturing us both and tore down her clothes again. They dragged her to the center of the village. We both were crying but there was nobody to listen to us. After half an hour or so, the police came and my mother asked me to go and find my father, who was hiding at my uncle’s house. But he was too terrified to leave. I ran back and by that time police had taken my mother away.”

Not only was Masih and her mother abused, but her 15-year-old daughter Esha was, too.

“All those people who abused and tortured my wife knew me very well, but they did not respect anything,” Ashiq Masih, Bibi’s husband, told Mail Online. “They became so cruel. They even didn’t spare my daughters and tortured them. I was so afraid that day. I do not think it could have helped her or our family if I had tried to save her that day. I might also have ended up in jail as a blasphemy-accused, and there would be no one to help my daughters.”

Mr. Masih has appealed to the Pope and President Obama to try and secure his wife’s release.

“We need help from all quarters,” he said. “Barack Obama should play a positive role and convince Pakistani government to ensure justice in Asia’s case.”

There is an old expression that says, a Crisis separates the Men…

Most viewed articles
Good News from His Eminence Metropolitan Joseph149
Does It Matter if Jesus is God or Not?136
Courage,  Anyone?96
The Emigration of Abraham76
Moleben for Peace in the Holy Land to Be Held Tomorrow in Moscow70
By Love and Loyalty to God Women Build Up the Church62
Go and Proclaim the Good News1
Most popular authors
Archbishop Joseph of New York and Metropolitan of All North America149
Archpriest John Moses (+2019)136
Archpriest Geoffrey Korz96
Archpriest Lawrence Farley76
Pravmir.com team70
Metropolitan Hilarion (Alfeyev)61
Maria Trushanina1
Priest Luke A. Veronis1