Source: Christian Today
Ruth Gledhill | 02 November 2016
More than 540,000 people have now signed a petition urging the Pakistani government not to execute the Christian mother of five sentenced to death for blasphemy. 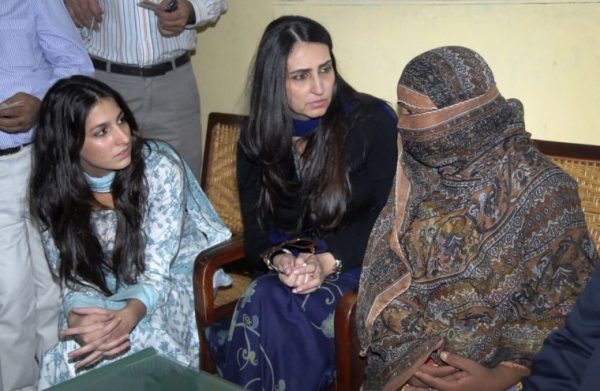 In a post on its website updating the case, the American Center for Law and Justice (ACLJ), the advocacy group behind the petition, says: “Several weeks ago, we sent an emergency advocacy letter to Pakistan’s Ambassador to the United States demanding Pakistan free Asia Bibi—the Christian mother of five currently on death row in Pakistan.

“This week we sent a second letter to Ambassador Jilani. In this letter, we expressed our dismay with the Supreme Court of Pakistan’s decision to further delay justice for Asia by postponing her appeal hearing. Again, we urged the Ambassador to do everything in his power to advocate for Asia’s freedom.”

More than half a million people have now signed the petition, titled: “Save Christian Mom Asia Bibi from Execution”.

Bibi was falsely accused of blasphemy – speaking against the prophet Mohammad – and if she loses her appeal, will be executed by hanging.

The petition says: “She would be the first woman executed under Pakistan’s Shariah blasphemy law. This is the ultimate human rights violation.”

The ACLJ is mobilising its international affiliate – the European Centre for Law and Justice – and its partner in Pakistan to free Bibi.

In its latest letter to Ambassador Jilani, the ACLJ says: “This further delay in Asia’s case is unacceptable. As we stated before, Asia’s arrest, imprisonment, and death sentence violate international agreements Pakistan has ratified without reservations.”

Bibi has already spent seven years in prison waiting for the final outcome of her case.

The majority of blasphemy cases in Pakistan are based on false accusations, followed by faulty investigations and trials full of errors – and it is accepted worldwide that this is what happened in Bibi’s case.

The ACLJ says: “Asia’s only crime was affirming her faith in Jesus Christ. Her firm stand for her Christian faith has cost her dearly. Her case is a controversial one, with radical Islamic clerics calling for her to be hanged.

“This controversy, however, does not excuse Pakistan from honoring its international and domestic legal obligations. Asia is still on death row, her fate is still uncertain, and Pakistan’s Supreme Court has yet to reschedule her hearing. In the face of this uncertainty, we are a constant — working continuously to advocate for Asia’s freedom.”

The Artos Bread: an Experience of…

Christ is Risen!  Can there be any doubt of that reality?!  How incredible…

Metropolitan Onuphry: Being Faithful to Christ…

Christ is Risen! Or is He truly risen? How many people doubt…