The Indiction at the Phanar – New ecclesiastical year celebrations 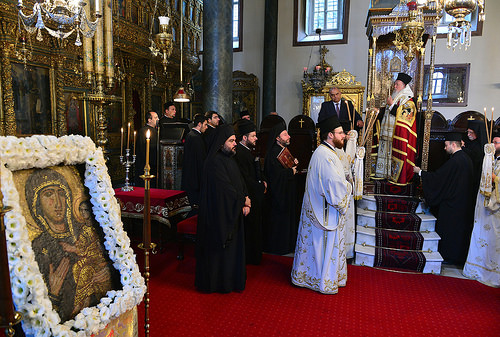 On Monday, September 1, 2014, the commemoration of the Indiction, or celebration of the new ecclesiastical year, His All-Holiness, together with members of the Holy and Sacred Synod as well as Hierarchs of the Ecumenical Throne, presided over the concelebration of the Divine Liturgy at the Patriarchal Church of St. George. Also on this day, which commemorates the Synaxis of the icon of Panaghia Pammakaristos and St. Symeon the Stylite, the icon of Panaghia Pammakaristos was brought out for veneration, while special prayers were offered for the protection of the natural environment.

Among those in attendance were Metropolitans Elder Constantine of Nicaea, Elder Apostolos of Derkoi, Demetrios of America, Iakovos of Chicago, Gennadios of Italy, Jeremiah of Switzerland, Augustine of Germany, Germanos of Tranoupolis, Sotirios of Toronto, Irenaios of Crete, Kyrillos of Imvros and Tenedos, Apostolos of Miletos, John of Pergamon, Iakovos of the Princes’ Islands, Joseph of Proikonnesos, Meliton of Philadelphia, Demetrios of Sebasteia, Irenaios of Myriophyton and Peristasis, Chrysostomos of Myra, Emmanuel of France, Gennadios of Sassima, Theoleptos of Ikonion, Athenagoras of Belgium, Eugenios of Rethymno and Avlopotamos, Amphilochios of New Zealand, Nathanael of Kos and Nisyros, Athenagoras of Ilion, Acharnon and Petroupoli, John of Langadas, Lete and Rentina, Stefanos of Kallioupolis and Madytos, Elpidophoros of Bursa, Athenagoras of Kydonies, Maximos of Selyvria and Theodoros of Ilioupolis.