International Forum on “The large family and the future of humanity” opens in Moscow.

Source: DECR
Natalya Mihailova | 12 September 2014
On September 10, 2014, an international forum on “The Large Family and the Future of Humanity” was opened at the State Kremlin Palace. 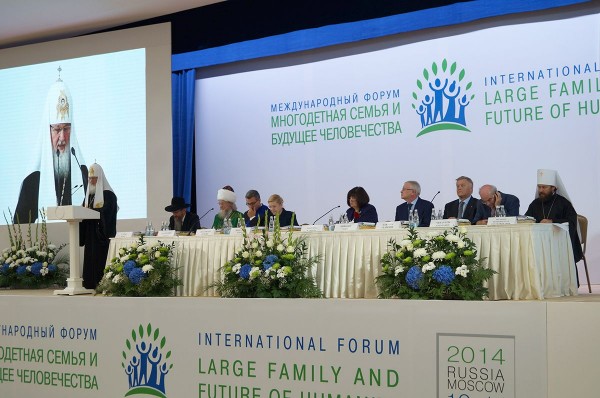 The participants will discuss family-oriented initiatives in various spheres of societal life and reflect on the social, economic, cultural and religious-Moral conditions in which the family lives in the world today. It is attended by over a thousand and a half people representing 69 regions in Russia and over 250 people from 45 countries in the world, as well as Russian officials and clergy.

The two-day forum held as part of the Russian national program “The Sanctity of Motherhood” is organized by the Center of National Glory and the Andrew the First-Called Foundation with the support of the St. Basil the Great Charity and the Patriarch Commission for the Family, Protection of Motherhood and Childhood with the participation of Russian and foreign public organizations. 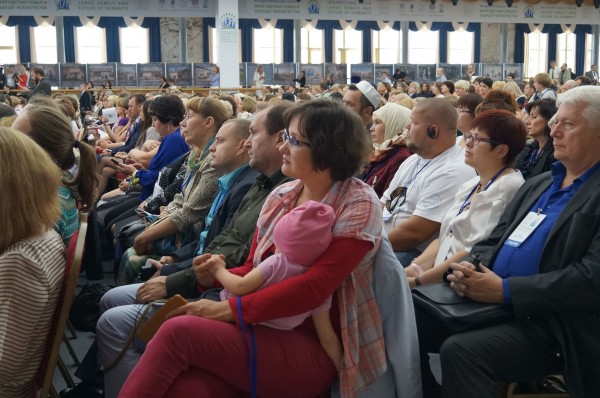 Present at the opening were also Ms. Ye. Mizulina, chair of the State Duma committee for the family, women and children, Mr. V. Yakunin, chairman of the St. Andrew the-First-Called Foundation board of trustees, Supreme Mufti of Russia Talgat Tajuddin, Chief Rabbi of Russia Berel Lazar and other representatives of governmental, public and religious organizations.

Mr. O. Morozov, chief of the Presidential Directorate for Domestic Policy, read out a message of greeting from President Vladimir Putin. It stated in particular that “in Russia, the state gives priority attention to the protection of the rights and interests of the family as well as motherhood and childhood. In this work we rely on close partnership with non-governmental and volunteer organizations, on the initiative and concern of the citizens themselves and on the historical, cultural and spiritual traditions of our people”.

Addressing the forum, Patriarch Kirill said in particular, “The large family is a phenomenon that influences very many because the large family is an example of how people build a very solid community by dedicating their life to others. The large and healthy family is a factor defining the moral health of the whole society. That is my profound conviction and for this reason I support all the events and the program which you have carried out in cooperation with like-minded people from many countries of the world”. 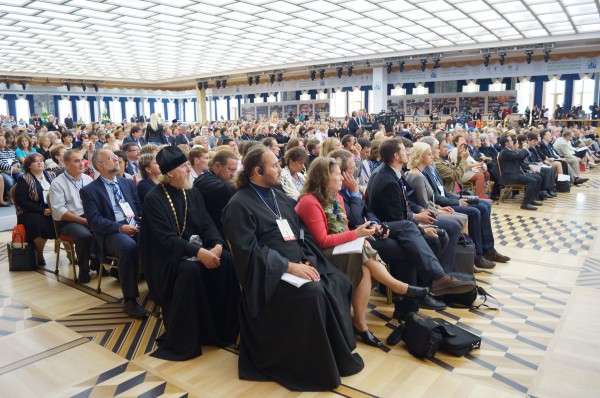 In his speech, Metropolitan Hilarion stated a demographic crisis in Russia and Europe caused among other things by the crisis of the family, “especially the crisis of the large family. The life of a large family in today’s Russia is an everyday hard work and feat; it is a life against all the patterns of a society of comfort”. Among the acute problems impeding the preservation of moral family climate in Russia is an enormous number of abortions. Metropolitan Hilarion called for solidarity of all religious confessions and all people of good will in the efforts “to safeguard the family against challenges of the secular world thus protecting our future”. 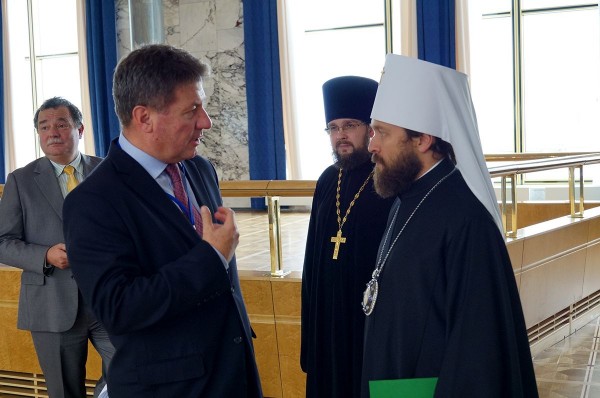 The forum will continue its work on September 11 at the Church Councils Hall in the Church of Christ the Saviour.