How the Internet Is Taking Away America’s Religion

Source: MIT Technology Review
The increase in Internet use in the last two decades has caused a significant drop in religious affiliation.
Natalya Mihailova | 10 April 2014
Using the Internet can destroy your faith. That’s the conclusion of a study showing that the dramatic drop in religious affiliation in the U.S. since 1990 is closely mirrored by the increase in Internet use. 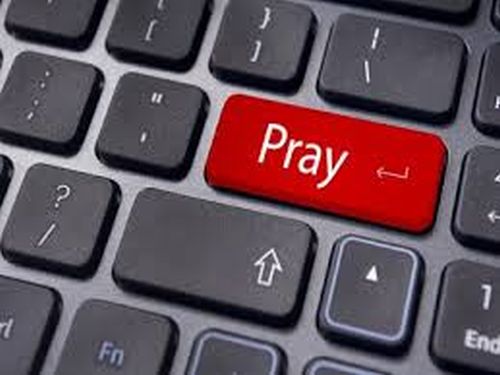 Back in 1990, about 8 percent of the U.S. population had no religious preference. By 2010, this percentage had more than doubled to 18 percent. That’s a difference of about 25 million people, all of whom have somehow lost their religion.

That raises an obvious question: how come? Why are Americans losing their faith? 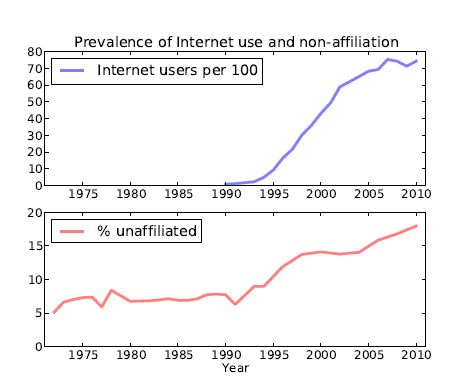 Today, we get a possible answer thanks to the work of Allen Downey, a computer scientist at the Olin College of Engineering in Massachusetts, who has analyzed the data in detail. He says that the demise is the result of several factors but the most controversial of these is the rise of the Internet. He concludes that the increase in Internet use in the last two decades has caused a significant drop in religious affiliation.

Downey’s data comes from the General Social Survey, a widely respected sociological survey carried out by the University of Chicago, that has regularly measure people’s attitudes and demographics since 1972.

In that time, the General Social Survey has asked people questions such as: “what is your religious preference?” and “in what religion were you raised?” It also collects data on each respondent’s age, level of education, socioeconomic group, and so on. And in the Internet era, it has asked how long each person spends online. The total data set that Downey used consists of responses from almost 9,000 people.

Downey’s approach is to determine how the drop in religious affiliation correlates with other elements of the survey such as religious upbringing, socioeconomic status, education, and so on.

He finds that the biggest influence on religious affiliation is religious upbringing—people who are brought up in a religion are more likely to be affiliated to that religion later.

However, the number of people with a religious upbringing has dropped since 1990. It’s easy to imagine how this inevitably leads to a fall in the number who are religious later in life. In fact, Downey’s analysis shows that this is an important factor. However, it cannot account for all of the fall or anywhere near it. In fact, that data indicates that it only explains about 25 percent of the drop.

He goes on to show that college-level education also correlates with the drop. Once it again, it’s easy to imagine how contact with a wider group of people at college might contribute to a loss of religion.

Since the 1980s, the fraction of people receiving college level education has increased from 17.4 percent to 27.2 percent in the 2000s. So it’s not surprising that this is reflected in the drop in numbers claiming religious affiliation today. But although the correlation is statistically significant, it can only account for about 5 percent of the drop, so some other factor must also be involved. 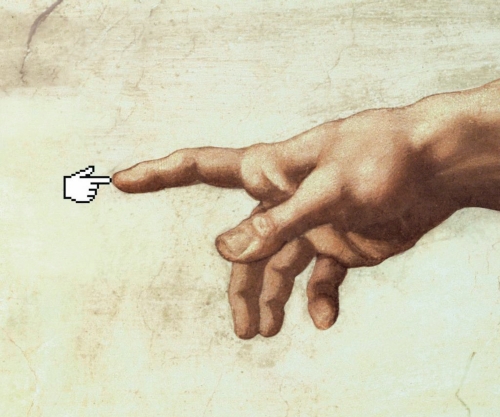 That’s where the Internet comes in. In the 1980s, Internet use was essentially zero, but in 2010, 53 percent of the population spent two hours per week online and 25 percent surfed for more than 7 hours.

This increase closely matches the decrease in religious affiliation. In fact, Downey calculates that it can account for about 25 percent of the drop.

That’s a fascinating result. It implies that since 1990, the increase in Internet use has had as powerful an influence on religious affiliation as the drop in religious upbringing.

At this point, it’s worth spending a little time talking about the nature of these conclusions. What Downey has found is correlations and any statistician will tell you that correlations do not imply causation. If A is correlated with B, there can be several possible explanations. A might cause B, B might cause A, or some other factor might cause both A and B.

But that does not mean that it is impossible to draw conclusions from correlations, only that they must be properly guarded. “Correlation does provide evidence in favor of causation, especially when we can eliminate alternative explanations or have reason to believe that they are less likely,” says Downey.

It’s also straightforward to imagine how spending time on the Internet can lead to religious disaffiliation. “For people living in homogeneous communities, the Internet provides opportunities to find information about people of other religions (and none), and to interact with them personally,” says Downey. “Conversely, it is harder (but not impossible) to imagine plausible reasons why disaffiliation might cause increased Internet use.”

There is another possibility, of course: that a third unidentified factor causes both increased Internet use and religious disaffiliation. But Downey discounts this possibility. “We have controlled for most of the obvious candidates, including income, education, socioeconomic status, and rural/urban environments,” he says.

If this third factor exists, it must have specific characteristics. It would have to be something new that was increasing in prevalence during the 1990s and 2000s, just like the Internet. “It is hard to imagine what that factor might be,” says Downey. 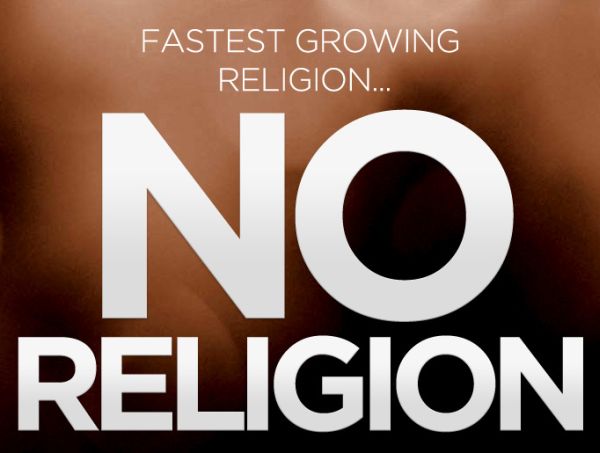 That leaves him in little doubt that his conclusion is reasonable. “Internet use decreases the chance of religious affiliation,” he says.

But what of the other 50 percent? In the data, the only factor that correlates with this is date of birth—people born later are less likely to have a religious affiliation. But as Downey points out, year of birth cannot be a causal factor. “So about half of the observed change remains unexplained,” he says.

So that leaves us with a mystery. The drop in religious upbringing and the increase in Internet use seem to be causing people to lose their faith. But something else about modern life that is not captured in this data is having an even bigger impact.