The Interparliamentary Assembly on Orthodoxy expresses concern on the Cyprus issue

Source: Famagusta Gazette
Natalya Mihailova | 01 July 2014
Minister of Education and Culture Costas Kades has stressed the close relations between Cyprus and Russia and the Orthodox Churches of the two countries, speaking during the 21st Interparliamentary Assembly on Orthodoxy. 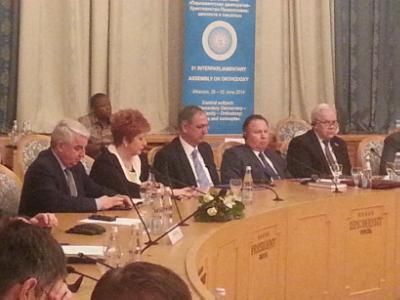 According to an official announcement, during the Assembly, titled “Parliamentary Democracy-Christianity-Orthodoxy: values and concepts”, it has been expressed the great concern on the ongoing partition of Cyprus. It has been also underscored the conviction that the accession of Cyprus to the EU will play an important role to the efforts to find a viable solution to the Cyprus problem.At the same time, the Assembly stressed the need for a solution to the problem that would be based on the UN relevant resolutions and the High Level Agreements and that it would be in line with the acquis communautaire.In his intervention at the Assembly, Kades pointed out that Orthodoxy has an important role to play in finding solutions to a number of problems.In a ceremony held at the Historical Museum of Moscow, Kadis cosigned with his counterpart Ministers of the Russian Federation, Greece, Armenia and Lebanon, a Joint Declaration which recognizes that the operation of the Interparliamentary Assembly on the Orthodox and the cooperation with other political and cultural factors is substantial and beneficial to the understanding of the people around the world.Cypriot Members of the Parliament Lefteris Christoforou, Angelos Votsis and Yiorgos Varnava represented the House of Representatives in the Assembly.