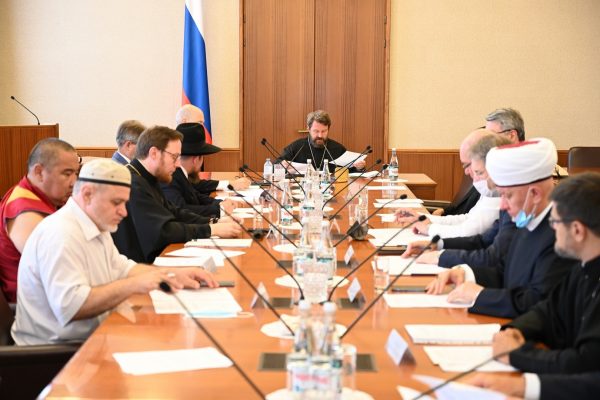 On July 19, 2021, the Interreligious Working Group for Aid to the Syrian Population under the Presidential Council for Cooperation with Religious Associations held its 11th session in the building of the Presidential Administration.

The meeting was attended by Hieromonk Stephan (Igumnov), secretary for inter-Christian relations of the Moscow Patriarchate’s department for external church relations (DECR) – the leader of the Interreligious Group: A. Vylegzhanin, deputy head of the Presidential Domestic Policy Directorate; A. Tretyakov, adviser, Presidential Domestic Policy Directorate; A. Terentyev, chief adviser of the Presidential Domestic Policy Directorate; S. Ryakhovsky, Lead Bishop of the Russian Union of Christians of Evangelical Faith (Pentecostals); Salih-Hazrat Ibragimov, imam-muhtasib of Nizhnekamsk and Nizhnekamsk Region in Tatarstan; Sh. Kadyrgulov, plenipotentiary of the Central Muslim Board in Moscow; Jean-Francois Thiry, representative of the Archdiocese of the Mother of God in Moscow (Roman Catholic Church) and leader of Pokrovsky Gates cultural center; Rev. A. Peterson, Evangelical-Lutheran Church in Russia; V. Neledva, head of the international relations department of the Muslim Spiritual Assembly in Russia; B. Protasevich, rector of Zaoksky University of the Seventh-day Adventists Church; A. Cherkezov, president of the Union for Promoting Traditional Religious Values “Christian World”, and Hierodeacon Peter (Akhmatkhamov), DECR.

The meeting was opened by Hieromonk Stephan, who, speaking on behalf of the Working Group, congratulated A. Vylegzhanin on his appointment as deputy head of the Presidential Domestic Policy Directorate.

A. Tretyakov made a report on the progress made in the preparation of the World Conference for Inter-Cultural and Interreligious Dialogue to take place in 2022 in Sankt-Petersburg and on the tasks facing the Interreligious Working Group in this connection.

Hieromonk Stephan also presented a plan of work to be carried out by the Working Group in the second half of 2021, which was approved after a discussion by the meeting.