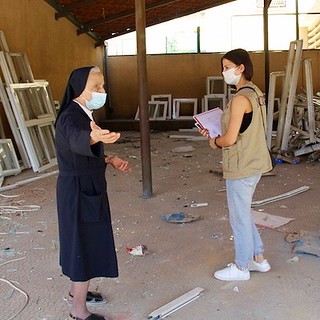 Since a massive explosion shattered Beirut last August, International Orthodox Christian Charities (IOCC) teams have been working alongside the community, offering relief, assessing damage, and helping to rebuild. Thanks to an outpouring of support from donors at home and abroad—including a generous grant from the National Philoptochos—IOCC responded quickly, with the blessing of His Eminence Metropolitan Joseph, Archbishop of New York and Metropolitan of All North America. Among the places particularly impacted is St. George University Hospital, which IOCC has helped work toward resuming service.

Another of the projects underway is the restoration of St. Vincent de Paul School, run by La Filles de la Charité. The school provides a low-cost education and free lunches for around 500 children whose families are facing unemployment or financial hardship—including some orphans in the care of relatives.

The school suffered severe damage during the explosion. Luckily, no one was hurt, but the building was left with crumbling walls and broken windows, doors, desks, and chairs. Water and sanitary facilities were also damaged—an even greater concern given the pandemic.

With support from partner Norwegian Church Aid (NCA), IOCC is working to repair the school. The need is urgent, as Sister Joseph, the principal, explains: “One of the mothers wants to send her children back to school just to eat … all her money is depleted, and she can no longer feed her children at home.”​

Full recovery will likely take years, but there is progress. In addition to NCA, IOCC is also working with Diakonie Katastrophenhilfe Germany and UNICEF to address longer term needs. Together, they are working alongside the people of Beirut as they continue to rebuild.