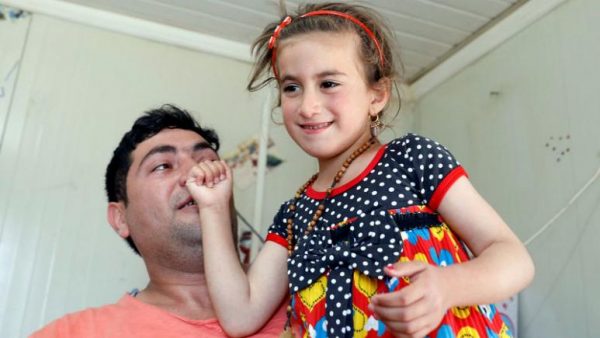 A six-year old Iraqi Christian girl, kidnapped by Islamic State when she was three, was reunited with her family on Friday, and getting used to saying “mum” and “dad” once more.

“The best day of my life is the day when Christina came back,” said her mother, Aida Nuh, on Saturday. Dark circles around her eyes are evidence of sleepless nights since August 2014, when the militants snatched Christina from her, a few weeks after overrunning the town of Qaraqosh, 15 km (10 miles) southeast of Mosul. “She stayed three years with the terrorists. Of course she forgot who her mother is, who her father is, that we are her family, but she will learn again.”

Islamic State has kidnapped thousands of men, women and children from Iraq’s minorities, mainly Yazidis. Christians who did not or could not escape in time were faced with an ultimatum – pay a tax for protection, convert to Islam, or die by the sword. Some, like Christina, were kidnapped.

Christian families who remained in Qaraqosh were forcibly displaced on Aug. 22, 2014. The militants took away Christina from the minibus which had driven them to the edge of Islamic State territory, after threatening Aida, who desperately resisted.

The family’s efforts to track her though Arab friends were rewarded on Friday, when they got a call telling them Christina had been found in Hayy al-Tanak, a poor neighbourhood of Mosul. Eighth months into the U.S-backed offensive to take back Mosul, all of the city has fallen to Iraqi government forces except a pocket by the western bank of the Tigris river.

“We went to a dirty place in Hayy el-Tanak (..), we took the child,” said Christina’s blind father, Khader Touma, wearing dark glasses and surrounded by the family now complete with the return of his youngest daughter. Her two sisters and two brothers had escaped to Kurdish territory before the arrival of the militants.

“I’m with mum and dad,” said Christina, playing with a plastic toy, in a mobile home for displaced people in Ankawa, a Christian suburb of the Kurdish capital Erbil, east of Mosul. The parents said they now hoped to emigrate, to put their ordeal behind them. In the meantime, they face a long wait in the cramped cabin, because their home in Qaraqosh was almost completely destroyed in the fighting to dislodge the militants.