Source: Breitbart
Thomas D. Williams, Ph.D. | 24 February 2017
A group of Christians has erected a massive cross outside the city of Mosul on land recently liberated from domination by the Islamic State terror group. 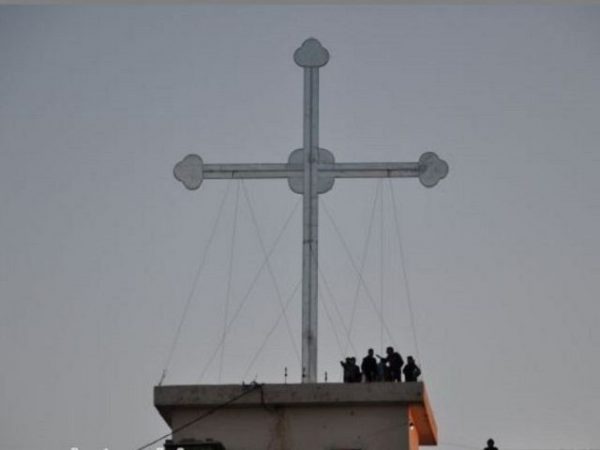 Last weekend, the Chaldean Catholic Patriarch of Baghdad, Louis Raphael Sako, visited the site and blessed the new cross in the village of Telekuf-Tesqopa, 17 miles from Mosul.

A large group of Christian faithful accompanied the archbishop to a hill on the outskirts of the city where he blessed the enormous cross as the people set off fireworks and cheered, “Victory! Victory! Victory! For those who chose the faith and those who return!”

This cross will announce to the world “that this is our land, we were born here and we will die here,” Archbishop Sako said. “Our ancestors were buried in this pure land and we are going to remain to preserve them with all our might and for future generations.”

“It is a sincere and great call to return and rebuild. We are joined to our land, to our future on the land of our ancestors. Here we can be proud of our history and here we can be granted all our rights,” Sako said.

The placement of crosses has become a recurring gesture since the Iraqi Army began the offensive to retake the city of Mosul, the stronghold of the Islamic State in Iraq. As villages have been liberated across the Nineveh Plain, Christians have made wooden crosses and placed them on the roofs of churches and homes.

Prior to the blessing ceremony, Archbishop Sako also celebrated the first Mass after two and a half years in Saint George Church, which was attended by authorities and officials of the region.

In his homily at Mass, Sako said that this event is “the first spark of light shining in all the cities of the Nineveh Plain since the darkness of ISIS, which lasted nearly two and a half years.”

“This is our land and this is our home,” Sako told the congregation, noting that the return of the faithful to the region demonstrates to the world that the forces of darkness, as terrible as they are, cannot prevail over Christ’s Church, which is built upon rock.

A year ago, the Patriarch published an Easter message in which he implored Christians not to leave Iraq, despite the hardships. Christians must “stay united in this land of ours, in which we were born, where we have lived for 1400 years,” he said.

In late 2014, Sako called the systematic persecution of Christians in Iraq by the Islamic State “a real genocide”and called for decisive steps to put pressure on decision-makers at home and abroad to ensure a free, safe life for all in Iraq.

“There were about 1 million Christians in Iraq and more than half of them have been displaced. Only 400,000 are left while displacement is still rising,” Sako said at the time.

Most viewed articles
Our Lenten Journey145
Moses and the Ten Words122
Serbian Patriarch Porfirije Gives Interview to Serbian National Television107
New Film about Orthodox Christian Vision on Climate Change96
In Church and at Home: Liturgical Resources for Great Lent76
The Wrath of God According to St. John Chrysostom59
Metropolitan Hilarion: Real People in the Virtual World of the Internet Also Need to Hear the Word of a Priest46
Bishop Benedict of Bistrița in Relation to Young People: I Want to Be One of Them41
COVID Directives From His Eminence Metropolitan JOSEPH1
How We Worship: the Struggle of the American Experience1
Most popular authors
Pravmir.com team249
Priest Luke A. Veronis145
Archpriest Lawrence Farley122
Peter Samore76
Archpriest Michael Gillis59
Aurelian Iftimiu41