Is Christianity on the Decline in the West? 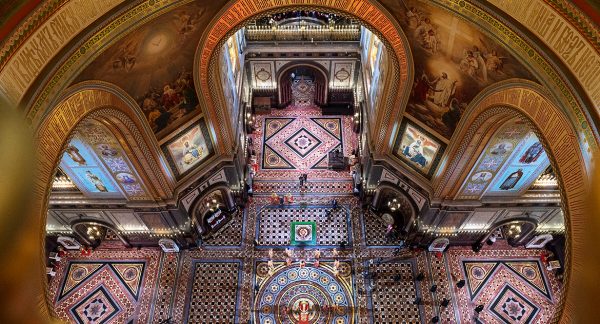 In particular the Anglican statistician with his gloomy prognostication and his predictable solution pointed to the Anglican Prayerbook as an example of their problem.  He said, “We have to reframe who we are.  If we still say, ‘No, we’re all about a prayerbook that was written 400 years ago’, then people are going to arrive at our doorstep and say, ‘Nah, I don’t think so.’”  When I shared this nugget with my wife, she just laughed and responded, “I’ll see you your four hundred years and raise you a thousand!”—a reference to the even older age of our own Orthodox Liturgy.  For age does not necessarily always invalidate or disqualify.  The wheel has been around for considerably longer than 400 years and its popularity is in no danger of abating.

There is, however, no denying that numbers of church attendance are indeed declining and have been for some time.  (This only holds true for Christian churches; numbers of Sikhs, Buddhists, Muslims, and Hindus are increasing, due to immigration and, I suspect, having large families.)  But I maintain that Christianity itself is not declining, but is holding steady and may even be increasing.  Let me explain.

In the Jurassic period of my youth, it was usual for people to go to church on Sunday, and if you didn’t go to church, you usually admitted this with an air of apology.  Respectable people went to church because that was the respectable thing to do.  Church attendance was also boosted in that earlier era because entertainment options were more limited back then than they are now.  The Saturday edition of the newspaper always had a “Religion Section”, containing ad after ad for the various churches, grouped together by denomination, with a banner over the whole double page spread exhorting the readers to “Worship at the Church or Synagogue of Your Choice”.  In other words, church attendance was a part of our culture, regardless of whether or not one had a real and personal faith—especially since most stores were closed on Sundays anyway.  What else you gonna do on a Sunday morning?

Now all the stores are open on Sundays and there is a vast selection of other options for entertainment apart from singing church hymns and listening to preachers’ sermons.  The winds have shifted, and now one feels pressure to apologize for going to church services, not for staying away.  But I do not believe that real Christian faith is rarer now than it was then.

I believe that most people back then did not have the faith that Christ demands and regards as real. The Lord said, “Whoever of you does not renounce all that he has cannot be My disciple” (Luke 14:33). In other words, having real faith means giving your life and soul entirely and completely to Jesus Christ and being prepared to die for Him at a moment’s notice.  I suspect that most of the people filling the churches in the Jurassic period of my youth did not have that kind of faith.

This distinction is hardly new; it was noticed by thoughtful people like C.S. Lewis, who died way back in 1963.  Commenting on the decline in chapel attendance at his Oxford colleges, he wrote, “The ‘decline of religion’ so often lamented is held to be shown by empty chapels.  Now it is quite true that chapels which were full in 1900 are empty in 1946.  But this change was not gradual.  It occurred at the precise moment when chapel ceased to be compulsory.  The sixty men who [were merely nominal] came no more; the five Christians remained” (from his essay, The Decline of Religion).

I believe that this is precisely the situation in which we now find ourselves in the West.  What passed for Christianity was very often nothing of the kind, but a vague, sentimental moral Deism.  Our culture has now abandoned this religion, and is embracing a bold, secular approach to life, an approach that is increasingly hostile to the cultural remnants of Christianity that came before it and which still remain.  This is unfortunate, because most of the things which made life sane and happy in the West were products of this Christian culture, and so life promises to be crazier and unhappier in the future.  Even now teen suicide is on the rise, despite (or perhaps because of) of our pampered affluence.  “Spirituality” (variously defined) will of course always be on the secular market for people who are into that sort of thing, but these spiritualities will be radically individualized and devoid of any real accountability.  Real Christian faith will remain, and will exist in the small numbers it always enjoyed.  What passed for Christianity and what filled the churches, is passing away.

What does this mean for us? Two things.

Firstly, it means we must resist the temptation to “adapt” and change in order to better conform to the secular society around us. The United Church has been “adapting” for some time now (arguably since it began in 1925); the Anglican Church has been adapting as fast as they could since the 1960s. How well this adaptation is working is apparent from the numbers delivered by the long-faced statisticians:  by about 2040 the Anglican Church may have adapted itself out of existence.  The Churches which are not declining as catastrophically are the ones which refuse such adaptation—such as our own St. Herman’s here in secular British Columbia, which uses a prayerbook that is (as my wife observed) something like 1400 years old.  Besides, our task as a church is not to be successful (as defined by the world and its statisticians), but to be faithful (as defined by Christ).  We strive not conform the Church to the world, but conform men and women to Christ.

Secondly, this decline in a merely cultural Christianity is a good thing, because it presents us with a real opportunity.  To quote Lewis again, “The fog of ‘religion’ has lifted; the positions and numbers of both armies can be observed; and real shooting is now possible.”  Many people have never really heard the Christian message.  They imagine that our Gospel consists of saying, “God is nice, and wants you to be nice. Therefore please be nice and respectable, avoid sex as much as possible, don’t swear, and make sure you vote Republican or Conservative.  Then you will go to heaven when you die.  And remember that everyone who is gay is going to hell.”

Not surprisingly, most people are not impressed by this message.  Some are surprised when they learn that the historical Church is not impressed by it either, and that our actual message is quite different. The lifting of the fog and decline in religion offers us a chance to share our real message—the message that God came to live among us and to fight with His back to the wall; that by His cross and rising from the dead He opened up a way for the healing of the cosmos and the transfiguration of the world; that the way to glory is through blood and suffering; and that a new way of living is really possible if only you want it badly enough and are prepared to pay the price.

Of course, we must live this message, and not just mouth the words.  It begins by creating little islands of joy, hope, love, accountability, and sanity, little communities of people who are different from the world around them.  That is, it begins with a healthy parish church.  If the parish is striving to be a community of joy and love, there is hope it can spread this saving infection.  But if the parish is not—if it is just a club where religious people go when they feel like it—it will decline along with religion.  And that will not be a bad thing.  Such a parish deserves to decline and die.  As the Lord once said, “Every plant which my heavenly Father has not planted will be rooted up” (Matthew 15:13).