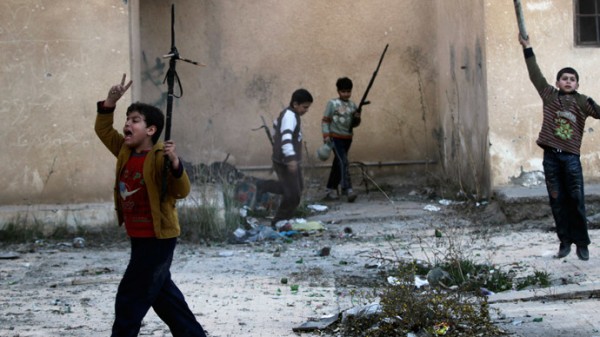 Islamic State militants are known for brainwashing children into joining their group, says a UN children’s representative. The organization says the militant faction are looking to “foster a new generation of supporters,” amongst young Syrians and Iraqis.

The extremist group on Wednesday blew up Mother of Aid Church, which had stood in central Mosul for thousands of years, according to the Kurdish news site Rudaw.

The blast also killed four children who were near the church at the time, Saeed Mamuzini, a spokesman for the Mosul arm of the Kurdistant Deomcractic Party told the news source.

Mosul, formerly home to thousands of Christians, has been occupied by ISIS since June 2014 and is considered to be the main stronghold for the terror group in the region. Once ISIS took over the city, it issued an edict to drive out the remaining Christian citizens and offered an ultimatum: convert to Islam or die.

The city, the capital of the northern Nineveh Province, was estimated to have a population of approximately 1.8 million at the time ISIS’ offensive, but 150,000 were forced to flee their homes to avoid falling under the group’s rule.

The recent destruction in Mosul is the latest in a string of attacks on Christianity’s heritage, which the jihadist group is steadily erasing from the Middle East.

In April, ISIS released disturbing photographs of its militants destroying ancient Christian graves with sledgehammers and carving out crosses in the ancient city. Earlier, the ISIS also posted videos showing its militants using sledgehammers to destroy the tomb of the biblical prophet Jonah.

Along with the photos, the extremist group released a statement attempting to justify the destruction by arguing that the “graves above the ground suggested that the dead person was closer to Allah than the living, so must be demolished and any images on the graves must be erased.”

Dozens of churches and Shia mosques in Mosul have also been blown up in the past year by the group, including the popular 19th century Hamo mosque and the 1800-year-old Assyrian church, because they were deemed heretical and sacrilegious.

In June, ISIS converted Syrian Orthodox Church of St. Ephraim, one of Mosul’s largest churches, into a mosque for the group’s “mujahideen.” As a sign of their intention to convert the religious building, the militants removed the cross from the church’s dome and sold all the furniture within the church, Fides News Agency reported.

Nuri Kino, founder and president of A Demand For Action, a group advocating the protection of ethnoreligious minorities such as Assyrians and Yazidis in the Middle East, says that the continuous attacks on Christian symbols and structures by ISIS shows that the group are continuing in their attempt to “cleanse” their caliphate.

“If so, it’s a scary development, until now they have bombed or, in other ways, destroyed churches but when they change [the church to a mosque], it feels more definite,” he says.

“A year ago they said ‘Convert, pay or die’ then it turned out to be a lie, that even if you pay you will not be able to stay,” he adds. “If they changed a church to a mosque it is further proof of their cleansing, something that many call a genocide. They destroy our artifacts, our churches and try to erase us in any way they can.”