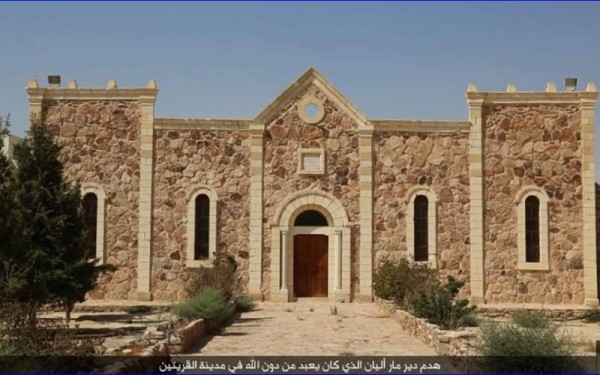 The monastery was originally built in the fourth century

ISIS fighters have demolished a monastery in central Syria, according to the Britain-based Syrian Observatory for Human Rights said.

The Mar Elian monastery in the town of Qaryatain near Homs, was captured by the terrorists  from the Syrian Army two weeks ago. This week they used bulldozers to raze the holy site,

Mar Elian is also where Fr Jacques Mourad was kidnapped in May. He remains one of six clergy in Syria who have been kidnapped by rebel groups, their fates unknown.

Qaryatain is near a road linking the ancient Roman city of Palmyra, also ISIS-controlled to the Qalamoun mountains on the border with Lebanon.

ISIS has also kidnapped 230 people including dozens of Christian families after taking Qaryatain. Of those captured, 48 had been released and 110 were transferred to Raqqa province, the headquarters of the Islamist group.